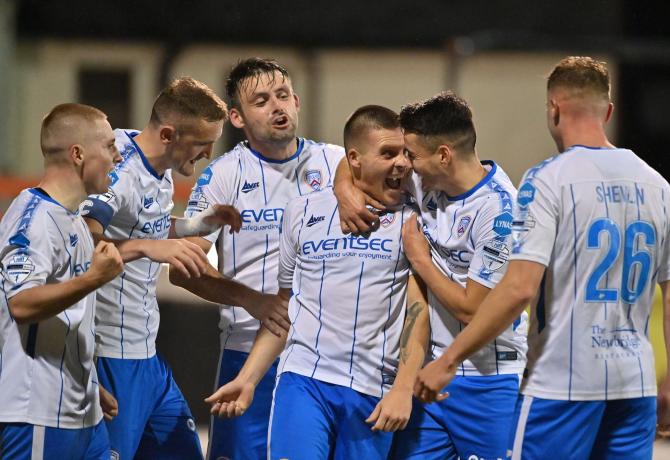 Those are only three words that could be used to describe the Bannsiders' 2-0 league success at Seaview last night as Oran Kearney's men moved up to third in the Danske Bank Premiership table.

The Stripes kept faith with the same starting eleven that beat Ballymena United last weekend and they showed their intent early doors as Eoin Bradley hit straight at Johnny Tuffey after being picked out by Aaron Traynor.

However, just after Stephen O'Donnell averted the danger from BJ Burns' cross, the visitors hit the front as Josh Robinson could only head the ball into the path of Bradley and he netted for the third time this season.

The Crues enjoyed plenty of possession but could only threaten Gareth Deane's goal once as Paul Heatley tested the gloves of the Coleraine stopper with an acrobatic effort.

Before the half-time whistle, Coleraine almost doubled their advantage as Tuffey had to be alert to tip away Conor McKendry's drive from the edge of the area.

The second-half started like the first ended as Coleraine went immediately on the front foot as Rodney Brown's header was palmed away by Tuffey as he denied the former Crusaders man a goal on his return to Seaview.

Stephen Baxter's side spurned a glorious chance on 51 minutes as a superb delivery into the box by Ben Kennedy was headed wide by Johnny McMurray who was well-positioned.

Just after the hour mark, Coleraine made it four wins from their last five contests as they edged further in front. A defence splitting pass from Matthew Shevlin sent Jamie Glackin on his way, and after he was thwarted by Tuffey, the alert Shevlin kept the ball alive to cross for Josh Carson who had the simplest of tasks to nod home from close range.

Tuffey was inspired form and he denied Coleraine from stretching their lead further as he denied McKendry with his legs, before making a great save from Stephen Lowry's effort.

A deserved and confident performance from Kearney's men ahead of hosting Glenavon on Friday night.