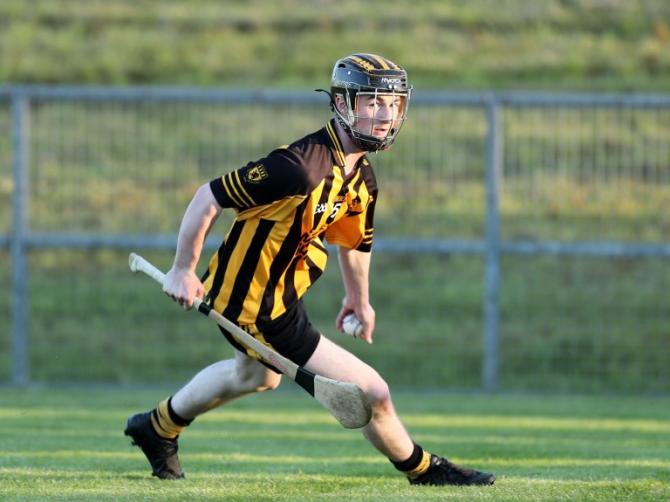 Diarmuid McShane who hit a couple of excellent points in Ballycastle’s draw game at Ballygalget.

BALLYCASTLE made the step up to Division 1 hurling once again after successfully negotiating their way through their one year stay in grade two.

They certainly weren't handed an easier opener, away to Down side Ballygalger and in conditions better suited to flying kites.

They negotiated the conditions admirably and despite facing the gale in the first half  were only three points back at the break, Came strongly in the second half but still had to rely on a late Ciaran Clarke point to secure a share of the spoils.

Playing against the wind it was the Ballycastle men who opened the scoring in the first minute with a pointed free from Ciaran Clarke, a lead which was short lived as the ‘Galget men equalised immediately with the next attack. Two points from Ballygalget free taker Conor Doran fell either side of a Ciaran Clarke pointed free.

The Co Down men pressed hard to make the most of their wind advantage, adding three unanswered points, however a resilient Ballycastle defence aided by Kevin Barry McShane now acting as an extra defender began to manfully curtail the best of their efforts.

A Ciaran Clarke point from play, punctuated two pointed place ball efforts from the home side, the pick of these being a spectacular side line cut from ace marksman Conor Doran.

An equally spectacular effort from an extremely tight angle saw Owen Kinney open his scoring account for Ballycastle keeping the visitors within touching distance on the scoreboard.

Points from ‘Magic’ Johnston and James Doran stretched the lead to five before two further Ballycastle points from Ciaran Clarke rounded off the half with the home side three ahead, 0-9 to 0-6.

Ciaran Clarke reduced the deficit to two on the restart, before Diarmuid McShane caught a puck out and scored a superb reflex point and it looked as if the visitors were set to kick on with the elements now in their favour . However Conor Doran and Daniel Toner points maintained the advantage for the home side.