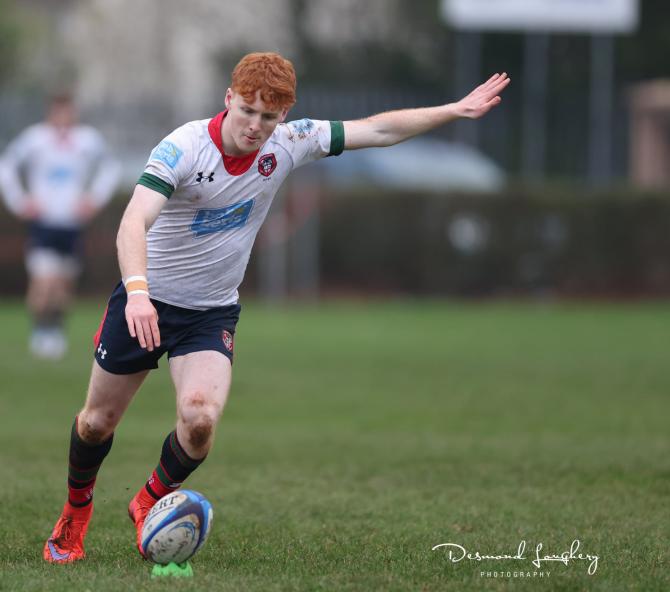 Captain and centre Rory Telfer will be a key player if Coleraine Grammar School are to get the better of Ballymena Academy this weekend.

COLERAINE Grammar School captain Rory Telfer says he and his colleagues will have to be at their best if they are to get the better of old rivals Ballymena Academy in the fourth round of the Danske Bank Schools Cup.
The schools meet at Ballymena on Saturday morning with most of the pressure on the home side who have entered the competition at a later stage than their opponents.
But top points scorer Telfer admits he and his team-mates are looking forward to the occasion.
“Away to Ballymena is a very tough draw and we will have to be at our very best to win,” the Ulster Schools player admitted.
“We have had a really positive and enjoyable season to date and it would be great to put our best foot forward and see how far we can go.
“ The coaches have set high standards and pushed us hard all year and it would be a real boost to the whole school if we can compete and deliver against Ballymena.
“Hopefully the experience of playing a cup game already, away from home and in front of a big crowd will be of benefit on Saturday.
“ This is what schoolboy rugby is all about and we look forward to the test ahead,” he added.
The Bannsiders defeated Limavady Grammar School 24-10 in the previous round and go into this weekend’s game quietly confident of causing an upset.
They lost at home to Saturday’s opponents earlier in the season but welcome back a number of influential players from injury for this latest encounter.
“The squad has gelled really well this season, worked hard and produced some excellent results,” explained head coach Richard Boyd.
“We were disappointed with the our second half performance at Limavady but we did show excellent character and sound defence to pull through which was an important learning experience.
“We have worked hard to fine tune some things in training and we have been given a real boost with the return of Nathan Ogborne and Jordan McAuley to the side.
“It is great to have the buzz of cup rugby back this year and a draw away to Ballymena is an extremely tough but exciting challenge ahead.
“The boys will be fully focused and ready to give their all against one of the favoured sides.
“ Hopefully we will have a big crowd there to support and we can give them something to cheer about and be proud of.”
His opposite number, Ballymena Academy head coach John Andrews is also predicting a tough game..
“Coleraine are a good side and have a lot of quality in their starting team,” he said.
He singled out Rory Telfer, saying he has been ‘a big part of the Ulster Academy set-up in the last three years.’
Coach Andrews guided Ballymena Academy to Schools’ Cup victory back in 2010.

Academy captain Andrew Donald said they are really looking forward to the Cup clash with Coleraine.

“We played Coleraine early in the year and won away from home,” he said..
“Since then the introduction of the U16 players has given our squad a real injection of quality and competition for places.”
The captain said they are pleased to have the tie at home.
Saturday’s eagerly anticipated game has a 10.30am kick-off in Ballymena and we will have report, reaction and photos from the match in next week’s paper.