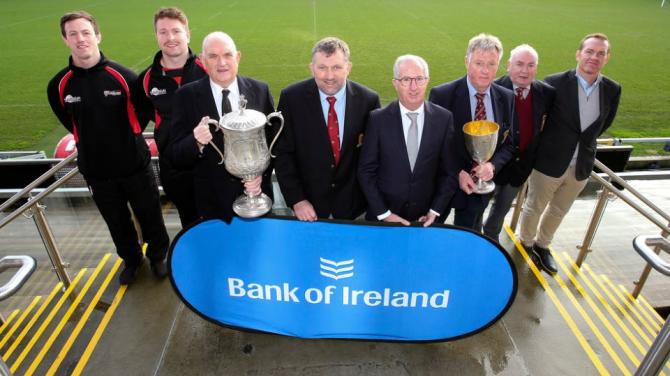 Pictured at the launch of the Towns Cup.

COLERAINE have been handed a home draw in the Bank of Ireland Towns' Cup.

Coleraine go into the game in confident mood, a 16-12 win away at Lurgan last weekend helping them consolidate second place in Division Two.

"This weekend sees Coleraine entertain Rainey Seconds in the Towns’ Cup, a difficult fixture against a much-fancied team," said a Coleraine spokesperson.

"It is the first round of the competition and the Coleraine coaches and players will be looking for a solid performance on the day."

An early try from Brian Hughes, converted by Tyler McNeill, helped establish an early lead for the visitors in county Armagh in their most recent outing.

The home side mounted something of a comeback but three successful penalties from the boot of McNeill secured a morale boosting win ahead of Saturday's cup game.

Limavady, too, will enjoy home advantage when they host Omagh Second XV but fate wasn't so kind to Ballymoney.

The boys fre' the Toon face a lengthy journey to the border to face Monaghan in a difficult looking assignment for the north Antrim club.

Fingers crossed for all three clubs this weekend...