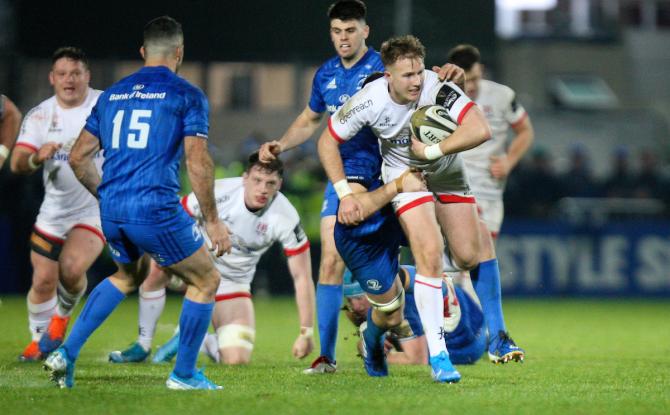 FORMER Dalriada pupil Stewart Moore will continue his rugby education on Friday evening when he makes his first senior start for Ulster.

The Ballymoney man has been named in midfield by Ulster coach Dan McFarland for the Guinness PRO14 opener versus Benetton Rugby at Kingspan Stadium (kick-off 8.15pm).

It caps a remarkable rise for Moore who only signed a new three year deal with Ulster at the start of the summer after graduating from the Academy.

Speaking about his new contract back in May, the talented 21-year-old admitted he was 'delighted' to commit his future to the province.

"I am delighted to have secured the next three years with Ulster," he said.

"This comes off the back-end of injury, so it’s nice to know that all of the hard work that I have been putting in has culminated in earning this new contract.

"I would like to think I have worked hard to get to this position. A lot of the hard work is mental as well as the physical aspect of it.

"Rugby is one of those sports where hard work is indeed rewarded, although, there are times where you might not think it.

"But the position I find myself in now has definitely proven to me that hard work does pay off," he added.

The Ulster team to face Benetton features Jacob Stockdale at full-back and he will be joined by Rob Lyttle and Craig Gilroy on the wings.

Stewart Moore will make his first senior start for Ulster, pairing with James Hume in midfield. Michael Lowry has been named to start at fly-half, alongside John Cooney at scrum-half.

Jack McGrath and Marty Moore will pack down either side of Rob Herring in the front row, and Sam Carter will partner captain Iain Henderson at lock. Matthew Rea, Sean Reidy and Marcell Coetzee have been selected as the starting loose forwards.

Back-row and Academy Player of the Year, David McCann, could make his senior Ulster debut if called upon from the bench, while prop Gareth Milasinovich is also set to earn his first cap following his return from a knee injury sustained shortly after joining the club last summer.

They will be joined on the bench by fellow forwards Adam McBurney, Eric O’Sullivan and David O’Connor. Alby Mathewson, Bill Johnston and Louis Ludik will provide the backline cover.