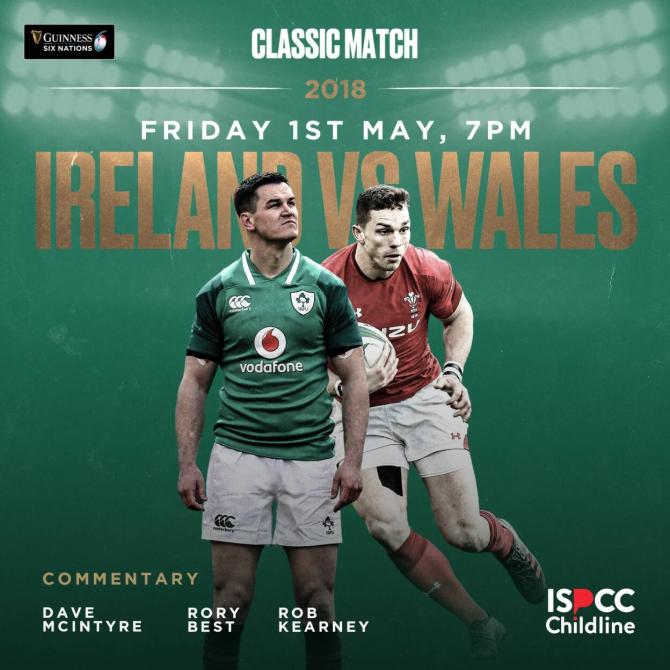 IrishRugby.ie and Guinness Six Nations have teamed up to bring you a live re-watch of Ireland’s 2018 Championship match against Wales with Rory Best and Rob Kearney.

The live stream will be shown on Friday May 1 at 7pm on Guinness Six Nations and Irish Rugby channels - and all for a good cause.

"A pivotal game in Ireland’s Grand Slam run and one that provided action from start to finish, we’ll have live commentary from Ireland’s captain on the day Rory Best and his teammate from both the 2009 and 2018 Grand Slam campaigns, Rob Kearney with commentary from Virgin Media’s Dave McIntyre," said a spokesperson.

"Normally tickets are like gold dust for Ireland v Wales in Aviva Stadium but this time all we’re asking is that you make a donation if you can to ISPPC Childline, as nominated by our team sponsor Vodafone Ireland."

Former Ireland skipper Rory Best admitted it would be a unique occasion for him.

“I’m really looking forward to Friday evening and watching the game for fun," he said.

"I know we are all missing our rugby so I hope fans will join Rob and myself with Dave McIntyre on comms for a bit of craic and a look back at a great game in Aviva Stadium.

"We’re also very conscious of the impact of the current situation on everyone and we’re delighted that Ireland team sponsor Vodafone has nominated ISPCC Childline as the charity for this live stream.

"We hope you can support them and join us on Friday evening," he added.