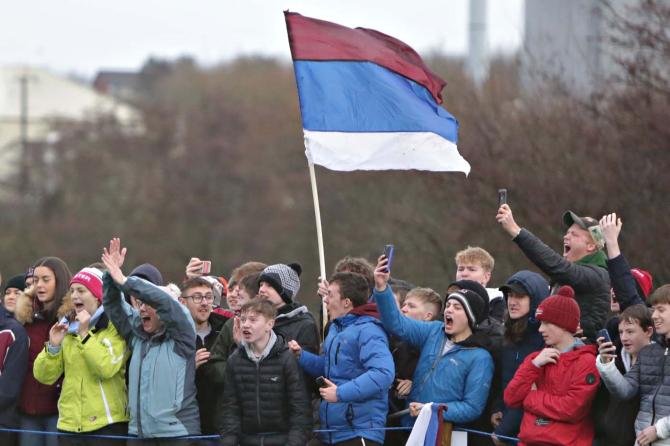 Dalriada supporters in fine voice as they overcome Coleraine Grammar School in a tense Danske Bank Schools Cup third round game at Coleraine.

DALRIADA School Ballymoney will meet competition favourites Methody in the fourth round of the Danske Bank Schools Cup on February 9 following their defeat of Coleraine Grammar School at the weekend.

A successful penalty with the last kick of the game from James McCormick earned the 'Toon' boys an 8-7 victory their derby rivals and set up an intriguing clash against the Belfast school.

"The Dalriada boys hung in there and gave themselves an opportunity to get another chance to win the game and that was the most important thing," said Dalriada coach Brian Young afterwards.

The defeat was hard to take for Coleraine Grammar School who dominated possession for large swathes of the match but failed to turn territory into points.

"Not converting that pressure into points killed us and we got hurt really badly in the breakdown," conceded Coleraine coach Richard Boyd.

"Hats off to Dalriada, though; they didn't get many opportunities but when they did, they took them."

For reaction and photos from what was a memorable occasion for both schools, see The Chronicle.