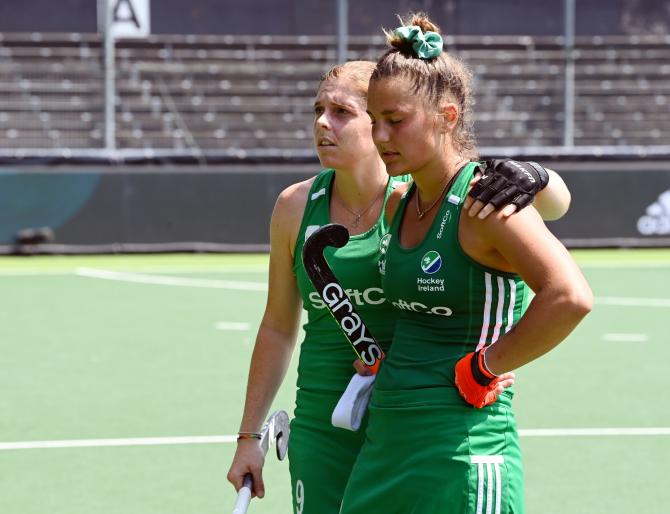 In the end, Spain’s late goal in a 7-1 loss against the Netherlands proved pivotal as Ireland missed out on a maiden European Championship semi-final on goals scored following their 1-1 draw in Amstelveen on Wednesday morning.

This draw left Ireland and Spain level on Pool A points, goal difference and their head-to-head meeting, meaning that cruel divider tilted in the Red Sticks' favour.

It denied Ireland’s first chance at World Cup qualification but they remain live in the tournament with fifth place overall still up for grabs which would earn their passage to the 2022 competition.

As such, Hannah Matthews says the side must deal with the 'devastation' quickly ahead of crucial games on Friday and Saturday in Pool C.

“For the next few hours, we will feel a bit miserable and sorry for ourselves,” the Loreto player said.

“But then we just have to pick a point tonight; put it behind us, be a goldfish, forget about it. There’s still a job to do; there’s still World Cup qualification on the line and there’s a lot of girls back home that we need to get qualification for next summer!”

It was an intense battle between two sides who have met so often on the big stages over the past five years, both rising almost simultaneously to seventh and eighth in the world, winning medals at the 2018 World Cup.

In the end, Spain – needing just a draw because of their superior goals scored earlier in the group – were savvy and smart to stymie Ireland a regular sight of goal despite a dream start.

Naomi Carroll tore down the right channel to draw a penalty corner in the second minute. Her Catholic Institute club mate Róisín Upton duly finished off the set piece, a bullet drag-flick into the bottom corner.

Spain, though, were back on terms in the 12th minute. It was a slick piece of work, a stepover gifting Maria Lopez time to pick out Begoña Garcia at the injector’s spot and she swept home from close range.

It became an absorbing contest after that with Spain enjoying the majority of the ball and looking to press on while Ireland went into a counter-attack mode.

It meant precious few chances between the second and third quarters with the greens not overly troubled during spells down to 10 players to a couple of green cards, likewise Spain when Lucia Jimenez went to the sin-bin.

Ayeisha McFerran got a strong stick to deny Lola Riera just before the end of the third quarter, keeping the tie very much up in the air for a high octane final 15 minutes.

Lopez’s heavily deflected shot clattered off the post and fell invitingly for Hawkshaw to start a brilliant counter which culminated in Anna O’Flanagan earning Ireland’s second corner. Shirley McCay’s shot, though, was well dealt with by the Spanish defence.

Upton produced some heroics to clean up a huge Spanish chance while McFerran swept up three more chances to keep hopes alive.

That golden opportunity never accrued for Ireland in a frustrating endgame. It means they will now contest Pool C where four teams will battle it out for the one remaining World Cup spot from this competition.

“We know Spain so well and they know us. It was always going to be difficult to get the tactics right and exploit each other.

Matthews will now look to dig into her archive of experiences – this was her 150th cap – over the next few days before Friday’s next Pool C tie to try and bounce back.

“We’ve experienced every scenario that’s possible over the last eight years or so! We definitely draw on that; there’s lots of quality teams in the Europeans so it will be hard no matter what but we will draw on it.

“I kind of forgot about it [being my 150th]! Look, its more about the quality of the caps and today was a great match. I said it to Clo [Watkins], we are so lucky in the year that has gone past that we are playing in a high stakes match like this, butterflies, all that. Just so privileged to play on a stage like this.”

Ireland carry three points into the four-team Pool C by virtue of their win over Scotland. Their next tie will be on Friday morning at 10.30am (Irish time) against an opposition to be confirmed later today. The concluding game on Saturday is against Italy at 3.30pm.