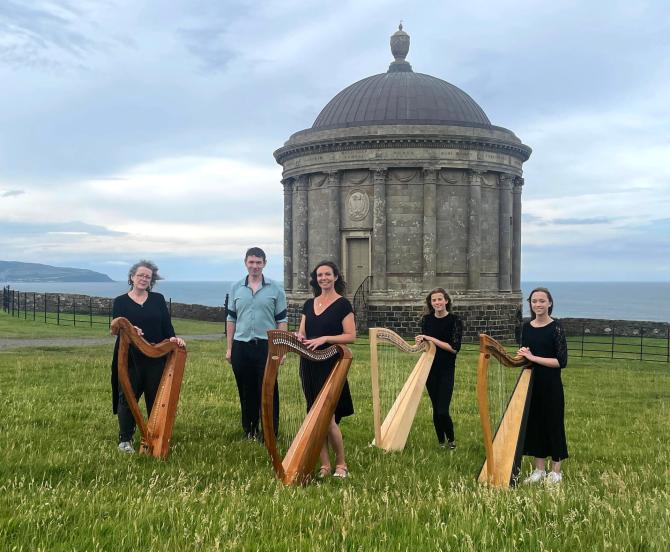 A SPECIAL event will celebrate the life and times of one of the greatest Irish traditional harpers at Mussenden Temple this Saturday, July 9.
Commemorating Denis Hempson, the live performance, dedicated to his life and priceless legacy, will open the Harps Alive/An Chruit Bheo/Harps Leevin festival.
The event will take place at the picturesque Mussenden Temple, Downhill, from 5pm to 8pm, with refreshments and buffet supper provided
The event is just one of a number of events that will celebrate the 230th anniversary of the landmark Harpers’ Assembly in Belfast in 1792.
A number of leading organisations have come together to make this event possible including Cruit Éireann Harp Ireland and Reclaim the Enlightenment.
The event’s three-hour programme will feature ‘Denis Hempson: The Harper & His Legacy’ presented by Mark Doherty and Limavady’s Fiona Pegrum QG.
Harper Aoibheann Uí Dhoibhlín will perform on a copy of the Downhill Harp, along with music from the Causeway Harp Ensemble led by Katy Bustard and the Scoil Ruaidhri Dall harp ensemble led by harper Nodlaig Brolly.
“This event will showcase the talents of many local harpers, who will play some of his best-known tunes to illustrate the Hempson story, which we will hear from historian Mark Doherty and genealogist Fiona Pegrum,” said John Gray, Chair of Reclaim the Enlightenment.
“We are indebted to the National Trust for letting us use one of Ireland’s most iconic buildings,” he added.
This event is a special highlight of the Harps Alive│An Chruit Bheo│Harps Leevin festival which features a series of events finishing with an event in Dublin July 24 to celebrate the 230th Belfast Harp Assembly.
In 1792, the Harpers’ Assembly in Belfast brought together 11 harpers, six of whom were blind and the eldest, Denis Hempson, who was 97 at the time.
Mussenden Temple was a familiar spot for harper Denis Hempson as he played many times in the Downhill Demesne.

CAUSEWAY HARP SCHOOL
Katy Bustard, Director of the Causeway Harp School will lead some of her young harpers at this event, as they perform music from the Bunting Collection, with a special focus on some of the favourite airs played by Denis Hempson.
Organised by the Harps Alive partnership, the Harps Alive│An Chruit Bheo│Harps Leevin festival will bring together the finest harpers from across the island to recognise the landmark event that collected music more than two centuries ago for future harpers to learn from and perform.
The festival will feature three major concerts, smaller recitals, talks and workshops taking place across the city of Belfast, in addition to an exhibition in Linen Hall Library, and a new publication on harpers gatherings in Ireland in the 18th and 19th centuries.
The festival opens this Saturday, July 9, at Mussenden Temple and closes with a commemorative ceremony at Bunting`s grave in Dublin on July 24.
A smaller ‘invitation only’ event will be held on the same day at the Hempson graveside in special recognition of this great harper, featuring talks from Dr Niall Comer, Aoibheann Uí Dhoibhlin and Stephen McCracken.
The full programme of events can be found at harpsalive.com