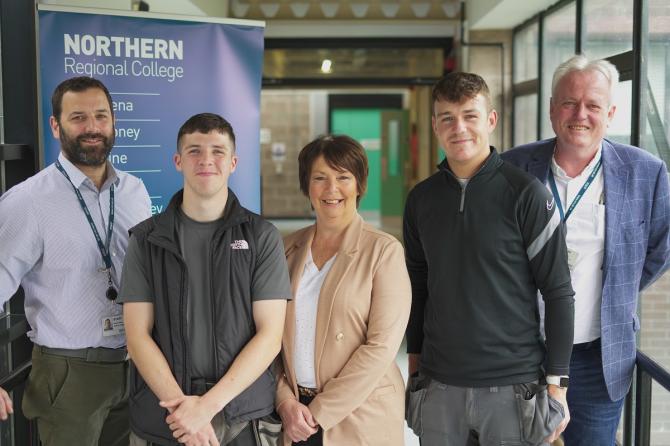 A NORTHERN Regional College apprentice was among the star performers at SkillBuild NI finals hosted by CITB NI (Construction Industry Training Board) at its Nutt’s Corner training facility.
Conor Dallas (24) from Loughgiel, who is a first-year bench joinery apprentice with Mivan and a student at the College’s Ballymoney campus, scooped the top award in the joinery.
As a regional winners, Conor received a cup and a cheque for £80. He may get an opportunity to represent Northern Ireland in the SkillBuild UK and/or Skill M&E UK National Finals and potentially secure a place on Team UK for WorldSkills international finals in France in 2024.
The national finalists are not announced until July, so he will have an anxious wait to see how his performance in the Northern Ireland finals compares with the scores from the regional final in England, Scotland and Wales. Only the top performers from across the UK are invited compete in the national finals in November.
Conor will be hoping to follow in the footsteps of former Northern Regional College apprentice, Samuel Gilmore, from Aghadowey. Samuel was a gold medal winner at WorldSkills UK national finals in 2018 and the following year he was an award winner at the European Alliance for Apprenticeship Awards in Finland.
The SkillBuild competition, which is governed by CITB, is the largest multi-trade competition in the UK for young students and apprentices. The annual competition is designed to test skills, techniques and ability to work within tight timeframes in the construction trades which also include brickwork, plumbing, electrical, floor tiling, plastering and brickwork.
Ian Forsythe, Curriculum Area Manager for Construction in the Department of Advanced Technologies at Northern Regional College, said: “The SkillBuild competitions are a great opportunity for our students to demonstrate their skills and knowledge gained in their specific curriculum skill area.
“The College has some highly skilled apprentices and trainees and the competitions give them a chance to see how their skills measure up against those of their peers.”
Congratulating Conor on his success in the regional finals, Christine Brown, Vice Principal for Teaching and Learning, said: “This is a great achievement for Conor, and for Northern Regional College, recognising the high standards of training delivered by the Carpentry and Joinery team. We wish him good luck in the next stage of competition, and of course in his further studies as he progresses on his chosen career path