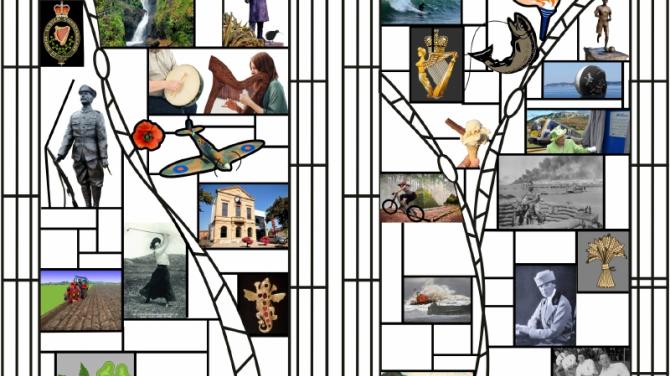 CAUSEWAY Coast and Glens Borough Council has published designs for the new stained glass window it hopes to install in Coleraine Town Hall.

The £20,000 window was commissioned last year as part of the council's Northern Ireland Centenary programme.

The design was drawn up by Cloonavin's NI100 Working Group with input from the Historical Advisory Group and the Honourable Irish Society.

The Society is providing funding of 50 per cent of the window's cost and owned the town hall until June 2021 when it was officially transferred to Causeway Coast and Glens Borough Council.

The design is now the subject of a public consultation required under equality legislation that requires public authorities to take account of “good relations between persons of different religious belief, political opinion and racial group.”

If approved, the window will be installed at the side entrance of Coleraine Town Hall facing Church Street in a spot considered prominent for pedestrians outside and visitors touring the building's interior

It incorporates three crests - for Coleraine, Northern Ireland and the Honourable the Irish Society.

Initial proposals to include a NI100 crest were amended because it was considered “contentious”.

According to the equality impact assessment the crest was omitted because “the image did not represent an officially designated NI100 crest and, in particular, as it included an image of the Ulster Banner. The NI100 crest was replaced by the ‘Northern Ireland Coat of Arms’.

Below the crests will be a “patchwork” of images reflecting the borough’s different district electoral areas and relevant themes. Among them are:

Sport (including golf, surfing and the North West 100).

Culture (including the Pipe-band Championships, Irish and Scottish dancing and Limavady Arts Centre).

Local Produce (from wheat and barley to Bushmills Whiskey).

History and Heritage (from Dunluce Castle to the Royal Ulster Constabulary).

The themes were suggested by councillors from across the borough. The final draft was agreed by members of Cloonavin's NI 100 working group in March.

The Working Group also agreed to invite views of the public.

The equality impact assessment states: “At this meeting, following equality screening of the draft window design and in recognition that some of the images may be associated with particular political opinions or may not have the support of all political groups, the working group agreed that a public and staff consultation process should be carried out on the final draft design to identify any equality issues.

A questionnaire asks members of the public to indicate how they feel about the window's installation in principle and individual components of the design.

Local firm, Chris McClintock Stained Glass has been awarded the contract for manufacture and installation.