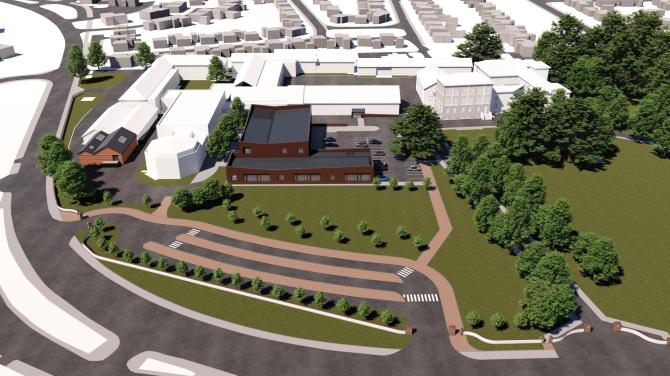 COLERAINE Grammar School has taken a major step towards uniting pupils on a single campus for the first time.
Though a final decision rests with elected members, council planning officers have recommended approving multi-million pound redevelopment plans for the school's Castlerock Road site.
They include refurbishment of the histrionic listed main building, a brand new teaching block and traffic management measures aimed at easing congestion outside the school gates.
CAI merged with Coleraine High School to form Coleraine Grammar in 2015, however the school operates across two campuses.
When the redevelopment is complete, all 1068 pupils will attend classes and conduct extra-cuticular activities at the redeveloped Coleraine Inst site.
The scheme will see the demolition of headmasters house and disused dormitories and construction of a new two-storey building containing classrooms, learning support, a sixth form centre and music rooms.
Also planned is an extension of the technology block, refurbishment of existing music suite, art department and media studio.

TRAFFIC MANAGEMENT
Traffic management measures on Castlerock Road will include bus parking and a bus pick-up and drop-off area.
“This should improve the flow of traffic as it will remove the buses from the main road and should be safer for the pupils who take the bus,” states the planners’ report.
To make room, a number of trees and some green space will be lost, planners acknowledge. But they insist the losses are necessary to facilitate development and no alternative site is available.
“The loss of the open space is necessary to facilitate the bus drop off area given this is the only suitable location to satisfy DFI Roads and to protect the setting of the listed building,” the report states.
The original main school Coleraine Academical Institutional building along with the memorial arch, gates and steps in front of the building are Grade B1 listed.
“These buildings make an important contribution to the architectural character of Coleraine,” write the planners
But, they say, the proposed development “will not impact upon the listed buildings within this site.”
Planners conclude: “The redevelopment of Coleraine Grammar School results in the creation of a modern single site school that introduces new buildings and upgrades rundown and outdated buildings whilst respecting the setting and functionality of the existing.”
While the Department of Education is ploughing in “a significant sum”, governors have been left seeking £1m to develop new sports facilities
Upgrades and alterations are required on facilities that were designed solely for boys.
At present, girls have to leave school to play hockey at Rugby Avenue on the other side of Coleraine.
Earlier this year the school launched a fundraising campaign to plug the gap.
A spoksperson for the school told the Chronicle: “It has taken some considerable time to reach this stage but we are still hopeful of a 2023 handover of the enhanced facilities at our school.”