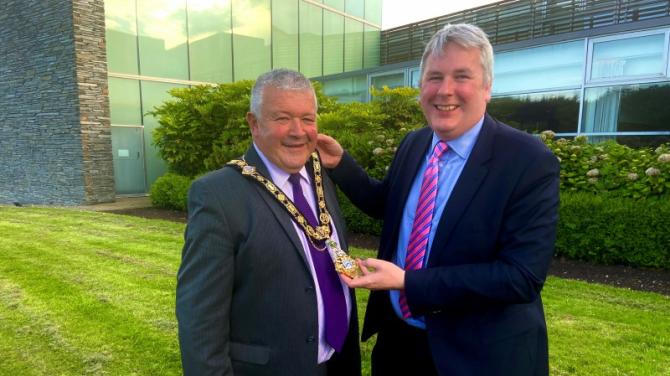 TRIBUTES have been paid to the outgoing mayor of Causeway Coast and Glens Council, Richard Holmes.

The Ulster Unionist member handed over the chain of office to the DUP's Ivor Wallace on Tuesday evening during the council's AGM.

Congratulating him on “a very successful year,” Cllr Holmes’ group leader Norman Hillis said: “He was not exactly clamouring for the position but I have to say he's done a fantastic job.”

Like a number of other councillors she drew attention to his handling of often fractious meetings, describing his approach as “firm but fair.”

Cllr Peacock added: “You conducted your role with positivity and extended hospitality not just to ourselves but to everyone from across the borough.”

The Alliance Party's Chris McCaw said Cllr Holmes had done “a fantastic job”, while Independent, Stephanie Quigley said he's been “a model first citizen”, particularly when it came to his support for Ukrainian refugees.

A second Independent William McCandless said Cllr Holmes had been “a great ambassador” for the borough.

The PUP's Russell Watton said he'd “reached out to everyone.”

Cllr Holmes’ DUP predecessor Mark Fielding added: “I would commend you for what you did over this last year.

“Every mayor has their own way of dealing with the role. You can't please everyone. You did it your way and I always found you very helpful and courteous about anything I approached you about and I wish you well as you revert to your normal seat.”

Cllr Holmes himself described his last year had been “a whirlwind of meetings, receptions, functions and Covid tests.”

His approach to which, he joked, could be boiled down to a three-letter acronym, SAS or “stomach in and smile.”

On a more serious note Cllr Holmes said the three words that best summed up the year were remembrance, celebration and normalisation.

“We celebrated the centenary of Northern Ireland and remembered those who fell at home and abroad in defence of freedom.”

Recalling his trip to the Somme memorial, he said: “The graves and poppies there are a reminder of the battle against the machinations of evil men and sadly today we see the same march in Eastern Europe.

“I hope and pray that again freedom will prevail.”

Cllr Holmes said he'd been happy to witness the part his borough was playing in the Queen's Jubilee celebrations.

He also spoke of links to the Honourable Irish Society and recalled his invitation to London for the Lord Mayor's parade.

“It's certainly a sight to behold and one for the incoming mayor to consider.”

Closer to home, he said he'd been honoured to meet 11 centenarians in the course of his duties.

“The greatest part was sharing their time and hearing their stories,” he said.

Cllr Holmes said he was gratified to see the Supercup football tournament back up and running and to see and hear the bikes of Armoy and the NW200.

One of the biggest impressions made on Cllr Holmes was the selfless efforts of volunteers from across the borough.

“What an inspiration to us all to see what people are doing for this society each and every day,” he said.

He also made special mention of chef Paula McIntyre and promotional body Taste Causeway “for putting us on the map.”

After paying tribute to council support staff, the chief executive and his deputy Ashleen Schenning, Cllr Holmes concluded: “The year has been exhilarating and informative while tiring and stressful at the same time and for all the amazing moments I look forward to passing on the baton and getting back to a more normal life.”