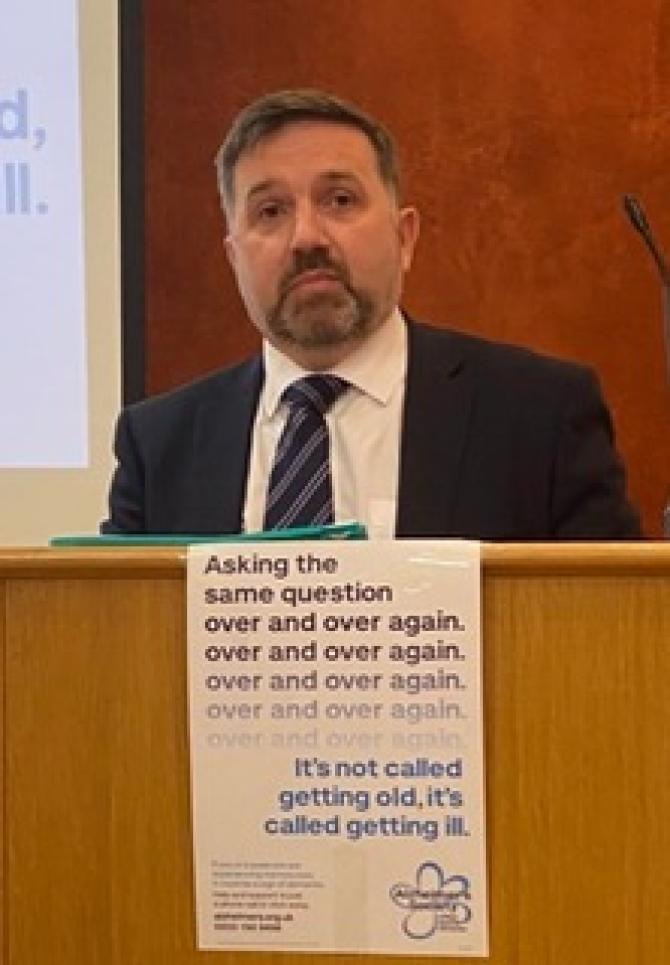 NORTHERN Ireland Minister of Health and North Antrim UUP MLA Robin Swann has called on the community to ‘do your bit’ to raise awareness of the challenges which sufferers from dementia and their carers have to face on a daily basis.

Minister Swann made his appeal when he was invited by the Alzheimer’s Society to the launch of Dementia Action Week.

Minister Swann added: “I cannot over emphasise the importance of such awareness raising campaigns, and the role they play in supporting those with dementia, alongside their families, and, shining a light on the support and guidance that is available.

“I commend the work of the Society as well as the wider activity taking place over the course of Dementia Action Week.

“I recognize, as we all do, the importance of challenging the misconceptions and misunderstandings around dementia, and, providing education and information to ensure the best possible outcomes and care are provided to those who need it.

“This year’s theme of ‘Diagnosis’ is arguably the most important step for those living with dementia. Without a diagnosis, or awareness of the condition, the opportunity to provide help and support to those who need it can be missed, and that can be a tremendous loss, both to the individual, and the family or friends who support them in their day-to-day life.”

Minister Swann said he had always been impressed at the emotive videos that the Alzheimer’s Society produces, stressing that they resonate deeply with those who view them.

“Awareness campaigns, and educational media can play an important role in ensuring that symptoms and signs of dementia are not overlooked and disregarded as simply a sign of getting older.

“Dementia remains one of the greatest health care, social and economic challenges facing society and the demographics indicate that this is likely to continue for some considerable time or until a cure for dementia is found,” said Minister Swann.