Police appeal after spate of burglaries 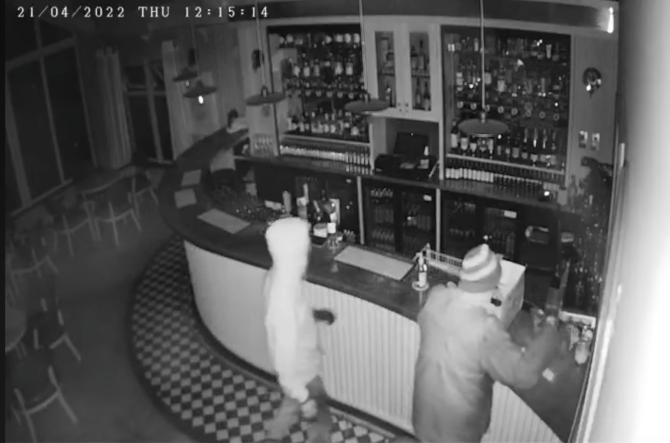 Those who broke into a local business caught on CCTV checking out the charity box on the bar.

THERE has been widespread condemnation following a spate of break-ins across the Glens in the last few days.

Properties on the Garron Road, Coast Road and Whitepark Road were targeted on the same night, with police investigating a possible link.

Detective Sergeant Gardiner said: “Police received a report that a car had been ransacked on the Garron Road, Glenariff at around 1:30am on Thursday April 21.
“Thankfully nothing was taken from the vehicle.
“We received a further report at 4.45am this morning that a property on the Coast Road, Cushendall had also been broken into and a rear door and tills forced opened. Damage had been caused to internal doors, but it is not believed that any money was taken at this time.
“We are investigating a possible link between these two incidents and further reports of burglaries at premises on the Whitepark Road, Ballintoy sometime between midnight and 7am this morning (Thursday 21st April) and the Garron Road and Glen Road in Glenariff.
“Thankfully nothing was reported missing following the incident on the Whitepark Road nor nothing substantial from the Garron Road.
“We also received a report of a burglary having occurred on the Garron Road, Glenariff, sometime overnight on the same date. The lock of a garage had been broken off and a number of items taken which included a mountain bike and gardening equipment.
“Another report was received at 10.45am from a property on the Glen Road, Glenariff that a wallet containing a sum of money along with tools had been stolen from a van sometime overnight.