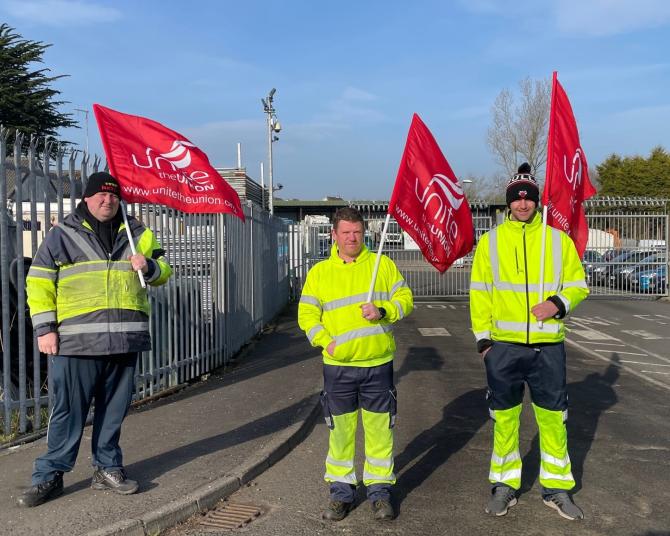 UNITE members William Sharpe, James Pollock and Richard Patton out on the picket line at the Causeway Coast and Glens council site on Knock Road Ballymoney, this morning (Tues Mar 22)>

CAUSEWAY Coast and Glens Council has announced there will be no bin collections this week because of strike action.
Unite union members are taking industrial action in the form of a discontinuous strike which began on Monday, March 21 and continues each day up to March 27.
The Council says it has been advised that the dispute is over pay.
It confirmed some services will be disrupted next week.
The main areas affected are waste collection, Household Recycling Centres and street cleansing.
“During the strike period there will be no bin collections and Household Recycling Centres will remain closed,” said a spokesperson.
Bin collections will resume from Monday, March 28 when residents should present their bins that were previously missed.
The schedule will then follow on a week behind normal service.
Unite said members had rejected a pay offer from local government employers in England, Wales and Northern Ireland of just 1.75 percent for the year 2021-22.
“The employers must now respond by tabling a pay deal in line with our members’ expectations and to meet punishing living costs."

See this week's Chronicle for more...