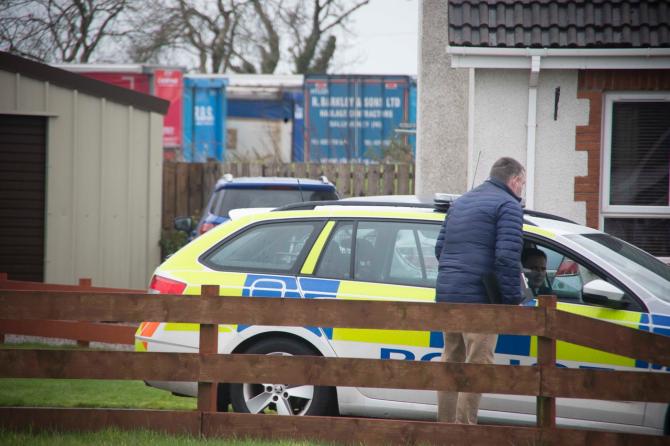 Police at the scene of the arson attack in Dunaghy on Sunday.

TWO more homes have been targeted by criminals bringing 'fear and despair' to Ballymoney and the wider area as the spate of serious incidents continues.
Last Friday morning residents, including many senior citizens, were evacuated from their homes in The Crescent area of the Glebside Estate after the discovery of a suspect device.
In the early hours of Sunday morning, in an unconnected incident, arsonists torched an oil tank at Barkley Court in Dunaghy with up to 20 firefighters called in to tackle the resulting blaze.
This makes a total of eight incidents, with seven homes targetted since January 11, in the wider Ballymoney area.
These include three aggravated burglaries, one burglary, three suspect devices and one arson attack.
That's a serious incident every five days, leaving a trail of shocked and traumatized victims, with police pursing paramilitary links in some and others apparently unconnected and perpetrated by persons unknown.

For more see this week's Chronicle.