‘UTV Life’ at the Movies 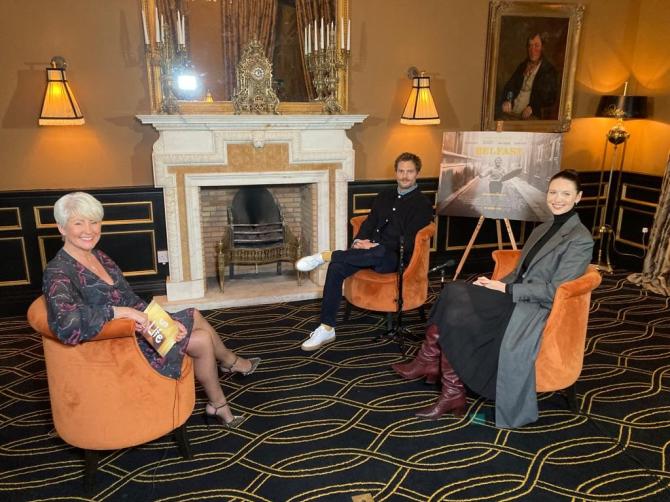 Actor Ciaran Hinds has paid tribute to Sir Kenneth Branagh’s writing in the movie ‘Belfast’ saying - 'the writing lifted off the page, bypassed my head and went straight to my heart.'

He made the comments in a recent interview with UTV Life’s Pamela Ballantine who got a chance to chat to several of the stars of the hit movie, due for general release in the UK and Ireland this Friday.

The movie premiered in Belfast in November as part of the Belfast Film Festival, going on release in USA and Canada shortly thereafter. There has been a massive positive reaction already with fans and critics, with Sir Kenneth Branagh just last week winning a Golden Globe award for ‘Best Screenplay.’

The film tells the story of a nine year old boy Buddy, played by child actor Jude Hill, whose childhood is turned on its head when he starts to see for himself the impact of the Troubles in 1969. The film features an all-star line-up, with Jamie Dornan playing Buddy's 'Pa', Caitríona Balfe as Ma, Dame Judi Dench playing Buddy's grandmother, with Ciarán Hinds as his grandfather.

The programme kicks off with Sir Kenneth talking to Pamela just before the red carpet event last year.  He talks about his hometown, and when talking about Belfast’s humour, he tells Pamela, “Belfast has kept me cheerful in many places around the world.”

Pamela then sits down with Ciaran Hinds, Jude Hill and Lewis McAskie, who plays Buddy’s big brother.  They tell Pamela about the great atmosphere that Kenneth created on set, with Lewis saying, “It was so fun, he makes sure everyone is like one big family.”

They also confess to Pamela there was lots of banter on set, with the Belfast humour and accents sometimes being lost on some of the English crew members.

Jamie and Caitriona chat to Pamela later in the programme, with Jamie revealing how proud he was to be asked to play the part of Buddy’s dad. He said, “I’m all for telling stories about home, it felt special.”

Jamie also pays tribute to Van Morrison who provides all the music for the film. He jokes, if you’re not a ‘Van Fan’ this is a tough watch!  His music is part of the tapestry of the place, it makes sense to have it ‘drowning in Van.’  His voice is Belfast.”

And in addition to the great interviews, viewers will also get to see some great clips from the movie.

Join Pamela for this ‘UTV Life’ film special on UTV on Thursday 20th January at 7.30pm.