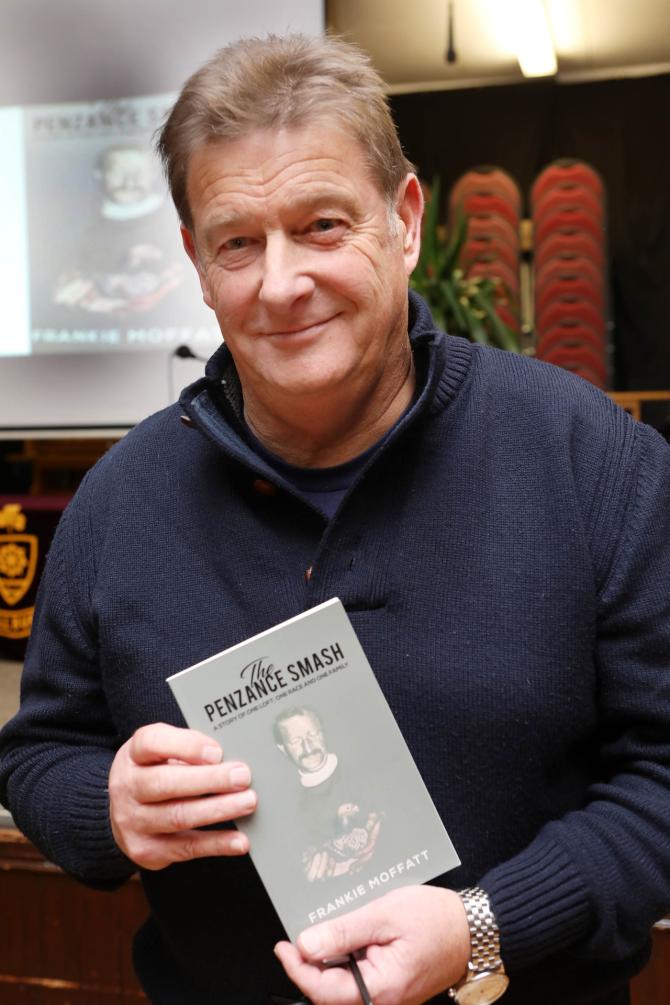 Frankie Moffatt pictured with a copy of his book at a launch in Millburn PS on Wednesday night.

FOOTBALLER, manager, businessman and, now, successful author.
There really is no end to Frankie Moffatt's talents.
An Irish Cup winner with Coleraine in 1977 and, later, a league title winning manager with Portstewart, he ended his working life helping run a business worth half a billion pounds.
Not bad for a boy from the Calf Lane, the Millburn housing estate which acts as the setting for his debut book - ‘The Penzance Smash’ - which received its official launch at Millburn Primary School in Coleraine on Wednesday evening.
Somewhat surprisingly, given his long association with the 'beautiful game,' the novel, described as semi-autobiographical, doesn't focus on football.
Instead, it's the much less glamorous sport of pigeon racing which dominates the 70-odd pages in a touching tribute to the author's late father, Joe, a successful pigeon fancier.
A painter and decorator by trade, Joe was forced to bring up his two sons – Frankie and Adrian – on his own, following the untimely death of his wife Minnie in 1960.
And it is the story of how the three of them coped – in good times and in bad – that forms the basis of this book.
“What it is, really, is a tribute to my father, about paying respect to him for how he brought me and my brother up on his own,” says Frankie, by way of explanation.
“My mother died when I was seven and Adrian nine and my dad had my mother's death to contend with plus bringing us up. There were no help groups, no mental health care, back then.
“We went to my granny's to live for a while and then we came back to the house, the three of us, and that was it. It was a case of paddle your own canoe, really.
“My dad's going out to work every day as a painter and decorator and we were two young boys going out to school.
“It's really just about capturing that time and the values he taught us as kids without ever really knowing he was doing it - or us realising what he was doing. The behaviours, we just kinda' copied him.
“That's what I realised as I started to right this thing, that this is what it was...”
Ironically, it was his grand daughter's prompting that convinced him to put pen to paper in the first place.
“About a year ago, my eldest grand daughter said to me - grandad, remember all the old stories you used to tell us when we were kids, about our grandad, racing the pigeons. She told me one of them, almost word for word. I thought, I really must capture those for posterity, for the family.

“Obviously, when retirement and lockdown came into play I had a lot more time on my hands so I sat down at the laptop to fiddle about and to write these wee stories.
“As I started, this thing just took on a life of its own and became something completely different which was kind of a surprise to me, but a very pleasant surprise, as I really enjoyed writing it.”
And I really enjoyed reading it, this simple tale of a hard-working father and his two sons making their way in the world.
But the real stars of the book are the pigeons to whom Frankie cleverly lends human traits, such as the ability to talk - characters like Proud Boy, Warhorse and Bootsy.
And, of course, Princess Sofia, who we come to learn resembles Frankie’s own mother.
The trials and tribulations of the loft in attempting to win the biggest prizes in the sport resemble the struggles faced by Frankie’s family in an era when times were tough.
But this isn’t a depressing tale; rather, it is an uplifting story of how families and, by extension, close-knit communities bandied together to overcome adversity.
With a healthy dose of pigeon racing nostalgia thrown in for good measure.
“Whilst some of the pigeon names and details have been changed the book is based on true life events,” continues Frankie.
“It was never my intention to get the book published, I only started writing it as something to give the grandkids.
“I really don't care about the business side of things – it's just nice that people can read about my father.
“I suppose people are quite surprised about the book but there’s more interest there than anything which is great.
“Depending on the feedback who knows, there might even be a second one.”
‘The Penzance Smash,’ published by Austin McAuley is out now.