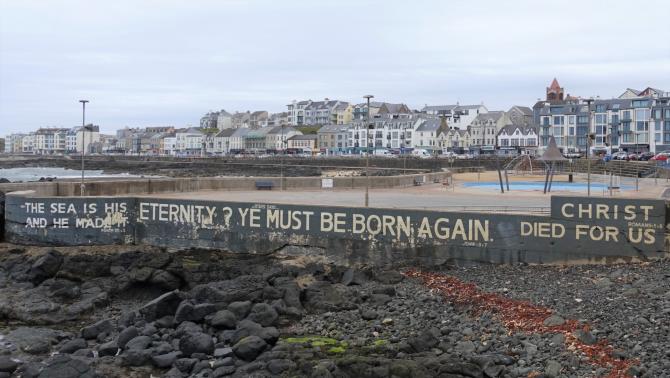 THE local council may have breached its own equality rules when it allowed Biblical tracts to be repainted on a Portstewart seawall.
Experts brought in to review a saga that dates back to 2018 have recommended training for officers and councillors involved in the decision and 'more robust' policies for dealing with similar requests.
They have also advised the council to carry out a formal public consultation on any further repaints at the controversial site at Portstewart's Crescent.
Three years ago, councillors gave approval to an unnamed individual to repaint three biblical scripts.
The Chronicle understands they are from the Ballymena area and, while contact has been made, so far, they have declined to comment.
The job was completed after a successful planning application.
But controversy surrounding the paint job generated province-wide media attention and complaints around issues of equality, good relations and negative impact in a tourist destination.
In May 2021, a second request was received to repaint the already faded lettering.
And this time, members of Cloonavin's Land and Property sub-commiteee sought legal advice.
Last month, consultants gave a verbal report and the contents of their assessment have now been released.
The report states: “As a result of previously failing to conduct an equality screening on the request to repaint the biblical script on the sea wall the council may be viewed as being in breach of its Equality Scheme.”
The consultants advise the council to review its original decision and this time to conduct an equality screening process.
It should also formally consult the public over 'equality and good relations implications,' taking account of previous complaints and submissions.
But the report goes further, warning the council to review policy on requests to use council land ensuring 'robust compliance with statutory obligations.'
It continues: “Senior staff and elected members should receive mandatory training in relation to their obligations outlined in the Equality Scheme.”
According to minutes of November's Land and Property subcommittee meeting, one Sinn Féin member, Cara McShane, raised concerns over the cost of the episode to ratepayers.
She also stated that equality screening was a statutory duty.
The DUP's Alan McLean and Mark Fielding both insisted the 'matter was not controversial' and that no such measures were required.
Nevertheless, the committee voted four to two in favour of accepting the report's recommendations.
Members agreed to 'instruct an equality screening process and conduct a public consultation process into the equality and good relations implications of any decision to permit biblical script on the sea wall.'