Sixty years on from when Hurricane Debbie battered the north coast 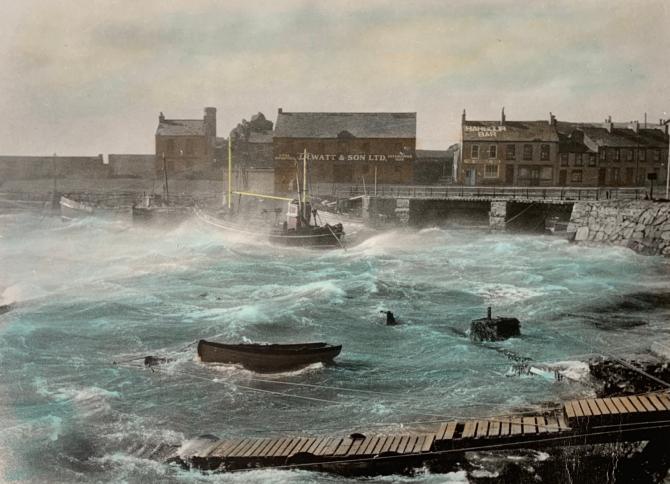 By John McNally
I WELL remember Saturday, September 16, 1961 when hurricane Debbie hit the north coast of Ireland.
We lived at number 69 Main Street, Portrush which is close to the Harbour.
During the previous days there were warnings of a major storm approaching but little did we realise the ferocity of what was on its way.
Hurricane Debbie initially formed as a storm west of Africa on September 7 1961 and immediately started moving westwards and intensifying.
It was given hurricane status on the 11th of September and quickly reached Category 3 intensity with maximum wind speeds of 195 km/hour.
On the 15th of September the hurricane turned northwards off Cape Verde Islands and then headed north-eastwards heading towards Ireland and Europe.
It made landfall in Dooega on Achill Island, Co. Mayo off the west coast of Ireland a peak gust of 183 km/h was recorded at Malin Head.

CHRONICLE REPORT
The Chronicle’s report on the Hurricane was headlined, ‘Ulster lashed by 100 mph Gale’ and went on to report:
“For the second time within two years gales reaching more than 100 miles per hour swept the country on Saturday last causing damage running into millions of pounds. Fifteen persons lost their lives – five in Northern Ireland and ten in the Republic.
The gale, which was the fringe of Hurricane Debbie, lasted for 12 hours and was described as the worst for more than a decade.
Hundreds of caravans and holiday homes along the residential stretches were completely wrecked.
Some disappeared into the sea with losses at Castlerock and Juniper Hill caravan camp on the Portrush-Portstewart Road at Ballyreagh exceptionally high.”
The Chronicle report continued: “The scene in Portstewart on Saturday night was reminiscent of the blackout during the war. Most shops and dwellings were without electricity for several hours. At the Golf Hotel in Strand Road two large chimneys fell onto the roof causing extensive damage. A pavilion under construction at Seaview Park, Portrush, for the local Hockey Club was wrecked.”

My own recollection of the Hurricane centred around being part of a gathering of locals around a grey building located at the end of what was then the railway bridge over the Old Dock.
The building provided some shelter from the lashing wind for us local storm watchers.
Seven boats were sunk in the harbour and further maritime losses were prevented through the heroic deeds of two local fishermen, Mac O’Neill and Hughie Patton.
They crossed, in what can only be described as extremely dangerous sea conditions, from fishing boat to fishing boat to secured lines which were then passed to shore for anchorage. In doing so, these local heroes prevented the entire fishing fleet from being dashed onto the railway bridge and harbour wall.

Portrush Heritage Group would like to thank to John for this most interesting article on the 60th Anniversary of Hurricane Debbie.