Rachel's find is one in a million! 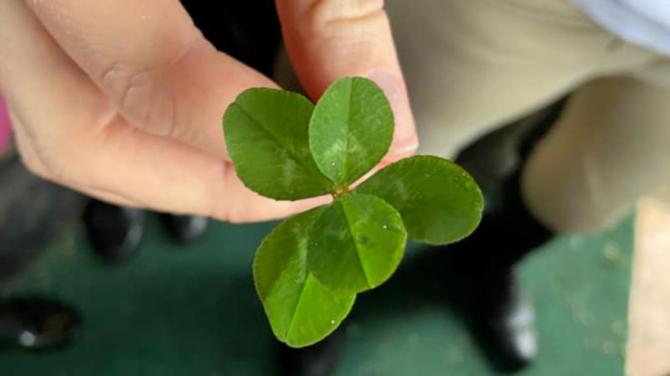 A CRUMLIN family could be counting their lucky stars after chancing upon a rare botanical marvel!

And while she was waiting to do the rounds with her trusty stead, she spotted something rather unusual.

There on the ground was a clover - but not just any clover.

“She picked it up and it was a five leafed clover,” said Philip.

“She brought it home and put it into a flower press.

“I have seen a four leaf clover but never a five leaf clover and we were wondering, what is the largest number of leaves ever recorded for a clover plant?”

According to the Guinness Book of Records, that title is held by a white variant, with one prized specimen boasting no fewer than 56!

But that does not mean that Rachel’s find is not rare. It is. Incredibly so.

It is estimated that the odds of finding a clover with four leaves are somewhere in the region of 10,000 to one. But that figure rockets to one million for its five-leafed cousin.

Irish lore has it that the first leaf represents hope, the second faith, the third love and the fourth luck.

A fifth leaf, however, represents money!

Maybe it’s still not too late to send Rachel down to the shops to pick this week’s Lottery numbers...