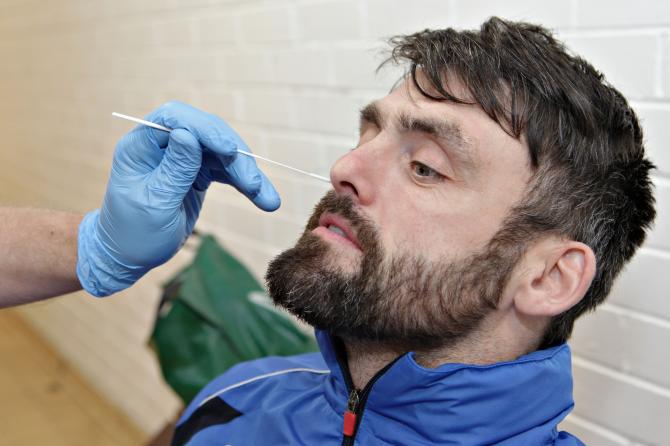 COLERAINE chairman Colin McKendry believes that if Covid-19 testing proves successful there is every chance the Danske Bank Premiership can be completed as intended.

However, a return of a positive test at any club leading to the postponement of games could see the number of matches drastically reduced, he added.

Clubs in the top division of the Irish League tested their players this week in advance of a proposed return to action on Saturday following a fortnight’s break.

Each club will be provided with enough test kits for four weeks, free of charge, thanks to the IFA and NIFL. More can be purchased after that period if clubs wish.

Testing is carried out by the club under supervision of the medical staff 48 hours before a game, with a result returned in 15 minutes.

The usual Public Health Guidelines apply should a test be positive, with the Showgrounds club having in place stringent protocols to reduce the risk of covid and players and staff adhering to the rules.

“I believe NIFL and the IFA have shown great leadership in all this,” said Colin.

“I know they come in for criticism at times but I think that in relation to Covid they have attempted to put in place procedures to try and protect people as best they can.

“The players will be tested under strict supervision to ensure they are carried out properly."

Members of the Bannsiders' playing squad and management staff underwent testing prior to training on Thursday evening ahead of Saturday's game at home to Dungannon Swifts.

The fixture represents the first of three games in seven days for Oran Kearney's men with a midweek trip to Larne following by a home game with Crusaders the following Saturday.