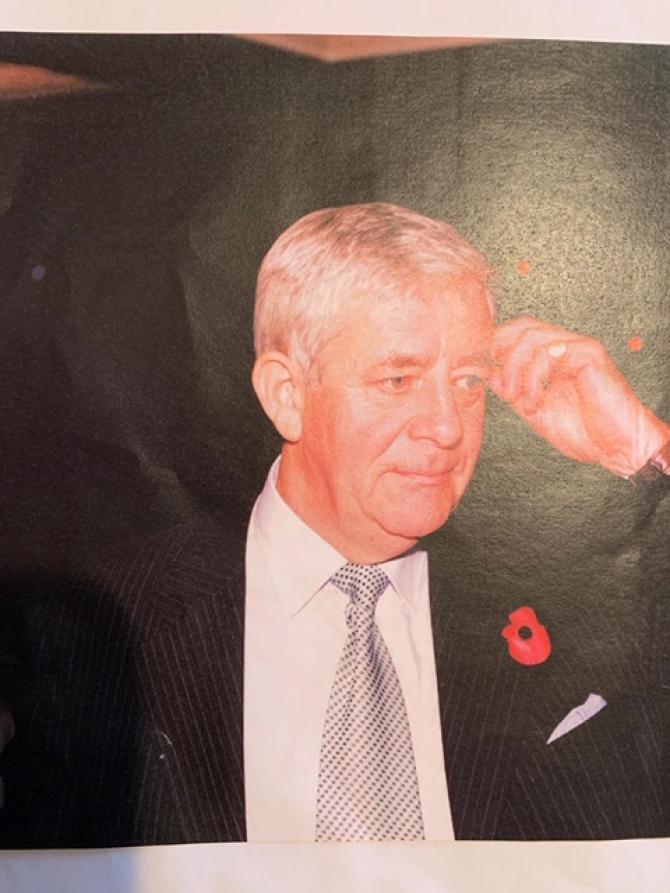 TRIBUTES have been paid to Bill Tweed, former Chief Executive of the Causeway Health and Social Care Trust, who passed away on Christmas Eve.

The Ballymoney man, whose drive and dedication helped to successfully deliver the Causeway Hospital in Coleraine after many years of campaigning, passed peacefully at Braefield Nursing Home.

Bill, lovingly remembered by all his family and friends and who had been living for a number of years at Portrush Road in Portstewart, is survived by widow Claire and children Shaun, Warren and Kirk, grandchildren and wider family circle.

He was laid to rest at Portstewart Cemetery on Monday, December 28 following a private service in the family home.

North Antrim MLA Mervyn Storey led tributes to a man he said had ‘worked tirelessly’ to improve health provision in the Coleraine and Ballymoney areas.

“Bill Tweed was dedicated to the provision of health care in the area,” said the long serving public representative.

“He was an advocate for our local hospitals, including the Robinson, and when the decision was taken to build Causeway Hospital he worked tirelessly to see it become a reality.

“He was in every sense of the word a public servant and someone who was highly respected by his work colleagues and all in the health profession and further afield,” he added.

Born in Ballymoney, Bill Tweed attended school locally before studying at the University of Bristol, becoming one of the first qualified social workers in Northern Ireland.

Following graduation, he embarked on a career in the health service which reached its peak when he was appointed Chief Executive of the Causeway Trust.

He gained an enviable reputation as a fair boss, treating each member of staff - porter, cleaner, director or doctor - equally, and with the same levels of respect and appreciation.

But without doubt his proudest moment came with the construction of the Causeway Hospital on the outskirts of Coleraine, designed to replace the former Coleraine hospital on Mountsandel Road and the old Route Hospital in Ballymoney.

Bill Tweed’s ability to get the best out of people ensured a smooth transfer of health services, promoting Causeway as a new centre for health services on the north coast while, crucially, not forgetting his roots.

After maternity inpatient services were transferred to the new Causeway Hospital, he oversaw the development of Ballymoney's Robinson Hospital as a Community Hospital.

A spokesperson for the Robinson Hospital Board of Trustees said members were ‘greatly saddened’ by the death of Bill Tweed and wished to pay tribute to his ‘dedicated service’ to the people of the Causeway area.

“During his time as Chief Executive, Bill Tweed oversaw the planning and building of the new Causeway Hospital, opened in 2002, and which replaced the original Coleraine and Route Hospitals,” said the spokesperson.

“Parallel to this, and at a time when the Health Service was trying to centralise hospital beds in large district hospitals, Bill was determined to maintain and upgrade the two existing community hospitals in the Causeway area - the Robinson Memorial and Dalriada Hospitals.

“He maintained and developed the strong partnership that existed between the Causeway Trust and the Robinson Hospital Board of Trustees.

“When Maternity inpatient services were transferred to the new Causeway Hospital, Bill enabled the development of the Robinson Hospital as a community hospital fit for the future.

“In 1999, the newly refurbished Robinson Hospital was officially opened and rededicated by Martyn Lewis, the renowned broadcaster and Dalriada School friend of Bill’s.

“After Bill’s retirement, the Causeway Trust Board and the Robinson Board of Trustees agreed to mark his unique contribution to the Robinson Memorial Hospital by naming the new Board/Training Room as ‘The Tweed Room,’” the spokesperson added.

It was a fitting tribute, too, as Mr Tweed always felt a strong connection with Ballymoney and the Robinson.

Indeed, it was noted in Alex Blair's history of The Robinson Hospital in Ballymoney that: “Mr Bill Tweed once mused to David Robinson, the present chairman of the Robinson Trust, that if the Trust were forced to close the Robinson he would have to leave his residence in Ballymoney. David's reply was “No – Ireland!”

Bill Tweed’s deep regard for his home town also extended to sporting matters. A talented footballer in his younger days, he came to favour rugby as he got older.

Somehow, inexplicably, he ended up playing for Coleraine before, as son Kirk explained, he ‘saw the light and switched to Ballymoney.’

It’s a rare enough move to make between two fierce rivals, so much so, in fact, that Bill Tweed’s switch led to the introduction of the ‘Tweed Cup,’ still eagerly contested each Boxing Day between the respective clubs.

Bill continued playing into his 40s, allowing him to share precious moments lining out alongside his three sons, Kirk, Shaun and Warren, before eventually retiring.

Given his leadership qualities, it would be no surprise to learn that Bill filled a number of important roles after hanging up his boots.

Current Ballymoney RFC president John Waide described Bill as a valued member of Ballymoney Rugby Club where, he added, he was held in high esteem.

“Bill had played at numerous clubs before he finished his playing career for his home town, making close to 200 appearances,” said John.

“Some of his proudest games were the ones he played alongside his three sons who were his pride and joy.

“Bill served in various committees and helped Ballymoney to move to their present home before progressing to chairman and then to club president, positions he held with distinction, ably supported by his wife Claire.

“Ballymoney Rugby Club extend their sincere condolences to Claire, Shaun, Warren and Kirk and their families and he will always be remembered and greatly missed by his friends at BRFC.”

But it is as a driving force in the establishment of a new hospital on the north coast that Bill Tweed will be best remembered.

That is his legacy.

“We were saddened to learn of the passing of Bill Tweed," said a spokesperson for the Northern Health and Social Care Trust.

“He had lobbied hard over several years for the hospital to be built and expressed his confidence at the time that it would serve the Causeway residents and visitors to the area well into the new millennium.

“That prediction proved to be accurate and today Causeway Hospital remains an important component of acute service delivery in the Northern Trust."

“We extend our sincere condolences to his wife Claire, sons Shaun, Warren and Kirk and the wider family circle at this sad time.”