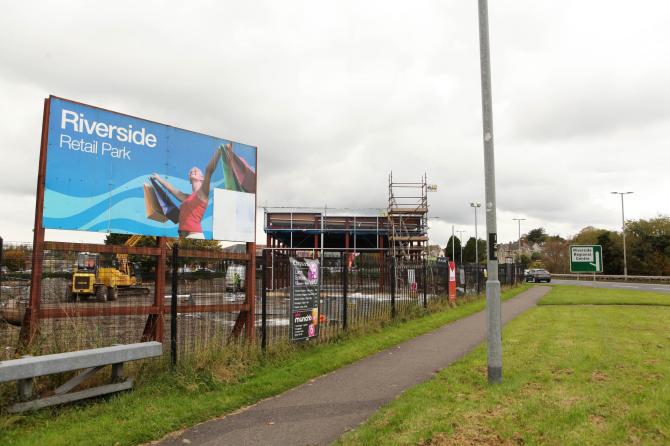 Construction is well advanced on the new Tim Horton restaurant at Riverside Retail Park in Coleraine.

FORTY jobs are set to be created with the opening of a Tim Hortons drive-thru restaurant in Coleraine.

The restaurant, currently under construction at Riverside Regional Park, will be the fifth the Canadian coffee chain has opened in Northern Ireland.

Kevin Hydes, Chief Commercial Officer at Tim Hortons U.K. & Ireland, said they were delighted with their expansion to the north coast.

"We're delighted to have secured a fantastic location in Coleraine for our new drive-thru restaurant," he said.

"This will be our fifth restaurant in Northern Ireland, bringing us closer to more of our fans across the country after a brilliant reception in and around the Belfast area.

"We’re very much looking forward to becoming part of the local community and serving their needs," he added.

The new restaurant will create 40 jobs, a combination of full-time and part-time opportunities, with roles including a mix of shift managers and team members.

"The restaurant is seeking outgoing applicants who are warm, welcoming and caring to join the team ahead of the upcoming launch," said a spokesperson for the company.

The Tim Hortons brand was founded in 1964 by its namesake, a top professional ice hockey player, who wanted to create a space where everyone would feel at home.

Today, it is estimated that nearly eight out of 10 cups of coffee sold across Canada are served at Tim Hortons restaurants and more than 5.3 million Canadians visit the café daily.

The first Tim Hortons in the U.K. opened its doors in Glasgow in June 2017 and a further 23 restaurants now serve guests in and around Birmingham, Glasgow, Cardiff, Manchester, Leicester and Belfast.