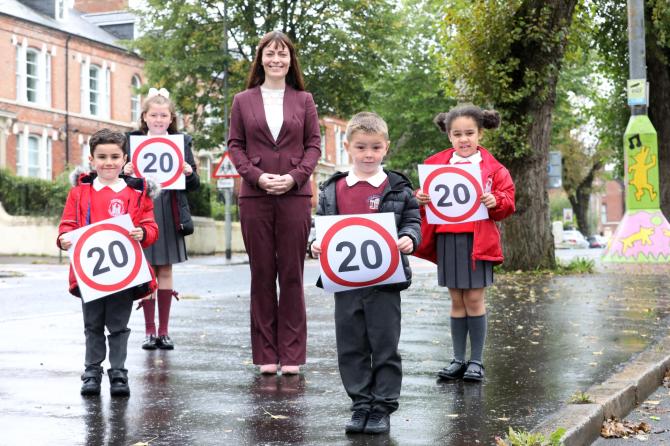 Infrastructure Minister Nichola Mallon with pupils from Currie Primary School and Holy Family Primary School at the launch of the roll out of 20mph speed limit schemes at 100 schools.

INFRASTRUCTURE Minister Nichola Mallon has announced the roll out of part-time 20mph speed limit schemes at 100 schools across Northern Ireland, including a number in the Causeway Coast and Glens area.

“I made a commitment in June to allocate £2million of funding to bring forward part-time 20mph speed limits at around 100 schools across Northern Ireland so that parents, children and staff will be safer as they go to and from school on a daily basis," said the Minister.

“I am delighted today to announce the 100 schools that will benefit from the introduction of the new reduced speed limits for this year. Children, parents and teachers in every part of the North will see positive, practical changes delivered on the ground by the Department of Infrastructure in their community.

“Schools in Northern Ireland were assessed across our four roads Divisions and 25 schools in each Division were identified based on considerations of need as well as individual site constraints.

“Road safety, especially around our schools, is a priority and it is my intention that through future programmes many more schools will have a 20mph speed limit on the roads outside their gates.

“My officials are working at pace to develop the schemes, take forward the legislation and put in place the new part-time 20mph speed limit measures at these schools.

“This is another step forward in our effort to make our roads safer, however, it is vital that all road users take care on our roads. Together we can deliver safer places for all our communities.”

At each of the schools new road signs will be erected in the form of standard fixed speed limit roundel signs with flashing amber lights set to come on at the times the reduced speed limit applies. This follows trials at a number of schools to determine the effectiveness of this arrangement of signs and it was found they have a positive impact on the reduction in mean speed.

Among the schools included are Carnalridge PS in Portrush, a number in Ballymoney and several in the Limavady area.