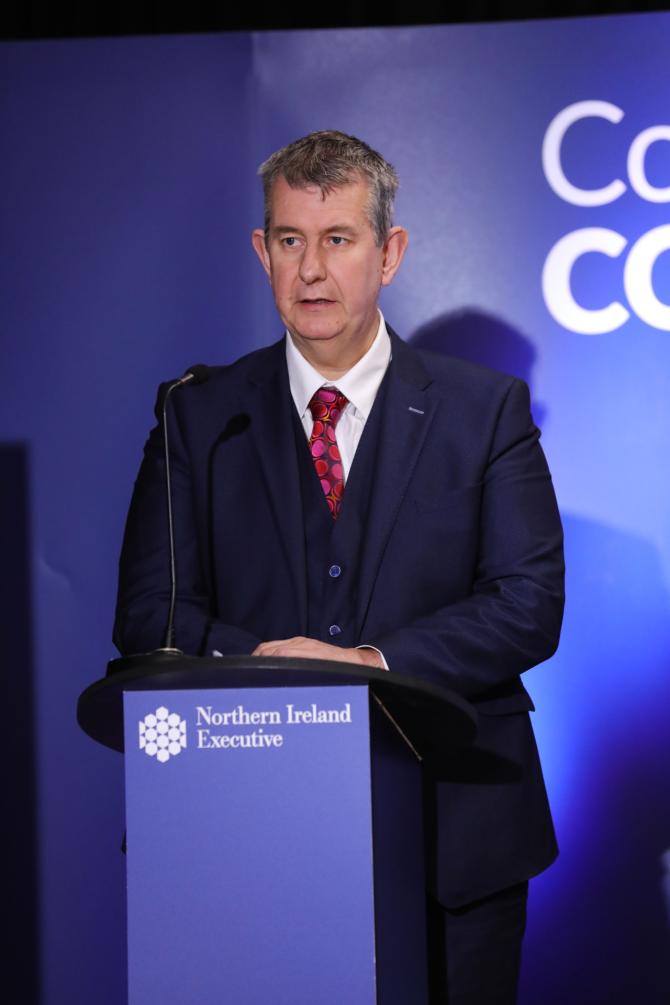 NORTHERN Ireland Executive ministers and their officials have over the past 24 hours been involved in a number of initiatives and critical decisions relating to the Coronavirus emergency.

Up to 24,000 devices could be provided to pupils, including vulnerable and educationally disadvantaged learners, to equip them for the new reality of blended learning in schools in the next academic year, Education Minister Peter Weir revealed.

Minister Weir told the Northern Ireland Assembly's Ad Hoc Committee on the Covid-19 response that, subject to the medical and scientific advice, he was looking at a phased reopening of schools, beginning in late August for some key cohort years. However, all pupils would be facing a mixture of attending some classes in school and undertaking online learning at home.

The Minister said: "Other than the current provision for children of key workers and vulnerable children, there will be no overall reopening of schools during the remainder of this academic year. Working alongside other Departments, we will explore what role the voluntary, community and private sectors can play in making some provision for our young people during the summer.

"Subject to medical guidance and safety, it would be my aim to see a phased reopening of schools, beginning with a limited provision for key cohorts in late August, followed by phased provision for all pupils at the beginning of September.

"This will not be a return to school as it was prior to Covid-19 but rather a 'new normal', reflective of social distancing and a medically safe regime. For all pupils it will involve a schedule with a mixture of school attendance and remote learning at home."

MLAs were also told that Northern Ireland's education system had been well positioned to provide remote learning from home. However Minister Weir said he was conscious some pupils were at risk of falling behind because they could not access the technology needed for education online.

He said: "In response, I have announced a scheme to lend devices to our educationally disadvantaged and vulnerable learners moving into key transition years. This involves a three stage process to the allocation of digital devices to children. Stage 1 - using existing school stock which is already being lent out. Stage 2 - using 3,000 new laptops which have been procured. Stage 3 - if needed, a further 4-8,000 additional devices will be bought. This could provide up to 24,000 devices to be lent to pupils over the coming months, according to need."

The Minister revealed he had also agreed a range of criteria for the lending of digital devices to pupils in need - prioritising pupils in Year Groups 11, 13, 6 and 3 who are eligible for Free School Meals, have Special Educational Needs, are in newcomer target groups, looked after children and children who are considered vulnerable.

Agriculture, Environment and Rural Affairs Minister Edwin Poots today revealed DAERA-owned forests and country parks are currently being prepared for the phased lifting of restrictions on members of the public using them.

Minister Poots revealed his officials had been looking in recent days at the opening up of public spaces run by DAERA and other operators for walking, running, cycling and exploring nature reserves.

The Minister explained: “Our estate has been restricted to the public since late March in an effort to slow down the spread of Covid-19, but I am very aware of how much people have missed our outdoor spaces and doing the things they love like walking, cycling and running – the things that are good for our hearts and good for our minds.

"Therefore, I have asked my Department to make the necessary arrangements for DAERA-owned forests and country parks to gradually lift restrictions on a phased basis, starting with the reopening of car parks on Wednesday, 27 May. Following discussions facilitated by my Department, many other organisations, including councils, have now indicated that they too will begin to reopen their car parks at many of their sites on that date."

In the meantime, the Minister has asked people to park their vehicles responsibly and respect the decision to keep other amenities closed for now.

The Minister said: “Until car parks are reopened on Wednesday, I am urging people not to park on footpaths and verges. I am also asking people to be sensible about how far they travel once car parking is available, as other on-site DAERA facilities such as toilets, visitor centres, cafes or playparks will remain closed and their reopening will be considered at a later stage.

"I am taking these decisions based on the most up-to-date scientific evidence, the ability of the health service to cope and the wider impacts on our health, society and the economy.”

Following the launch of the 'Milk Your Moments' campaign, he said: "I am very proud to support the Milk your Moments initiative and my Department has contributed £20k to ensure that Northern Ireland’s dairy sector is also promoted.

"It is a very welcome campaign to help our dairy sector and enrich lives through online connections with those close friends and relatives who we haven’t been able to physically meet up or visit in the last couple of months. A warm cup of tea at a distance, or a shared latte on a video call, help us to connect with our loved ones and enjoy those quieter moments together."

In the wake of the lifting of some the Covid-19 pandemic restrictions, the Department of Health reminded members of the public to keep at the forefront of their minds the need to protect themselves against the Coronavirus.

Urging citizens not to become complacent, a Department of Health spokesperson stressed the importance of the public continuing to adhere to advice around hand washing and social distancing to curb the spread of the virus.

The spokesperson said: "The guidance in place is clear – good hand hygiene and social distancing are crucial elements in preventing the spread of the virus and helps to save lives. These are simple steps but no one should doubt for a moment the impact that they have.

"The Executive recently announced that people consider wearing a face covering in places where there are difficulties social distancing, such as on public transport or in retail environments. This advice was recommended by the Northern Ireland Covid-19 Strategic Intelligence Group.

"It is important to note that the wearing of face coverings is primarily to prevent the wearer inadvertently infecting other people, however there may be some weaker evidence of benefits for the wearer."