Morale was boosted by 'amazing' support 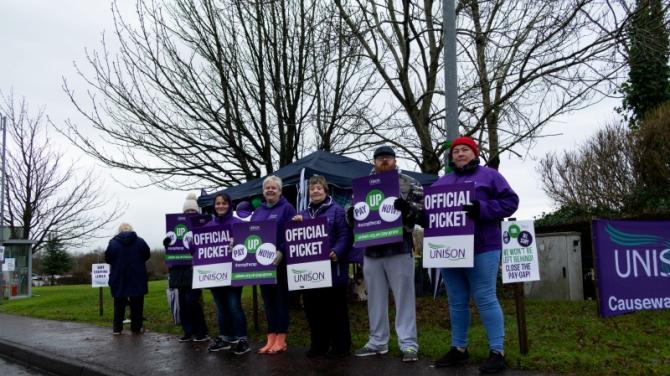 CAUSEWAY Hospital health workers' morale was boosted by the “amazing” support they received from the public and patients during their industrial action, according to a union official.

UNISON, Unite and the Royal College of Nursing had staged industrial action in protest over pay and staffing level.

RCN members were due to strike again yesterday (Monday), tomorrow (Wednesday) and Friday of next week.

Kim Hall, UNISON's Causeway Branch Secretary, told The Chronicle: “We want to say a massive thank-you to all those who supported us, from the local businesses who provided food and coffees on the picket line to taxi drivers who donated money to buy supplies.

“Members of the public were so supportive and made us feel valued, from motorists tooting their horns as they passed by to firefighters and paramedics who turned up to show they were behind us.

“Patients also backed us, telling us to take a stand for pay parity and safer staffing levels. It was amazing; the feedback has been so positive.”

She added: “UNISON is now intending to ballot all its members after providing them with all the information they need to make a decision.

“We are the largest union representing NHS staff from domestics and auxiliaries to radiographers and management with around 10,000 members spanning the Causeway and North Antrim branches. I am so proud of them.”

Health Minister Robin Swann said news that industrial action had been suspended following a £30m offer to restore pay parity, would "be welcomed by many, not least by patients and of course staff who took industrial action with a very heavy heart.”

An agreement around how the department will implement the necessary processes to increase the number of staff working across the health and social care service is yet to be agreed.

"Following the unprecedented decision to take strike action, our members finally have something concrete to consider in relation to both the restoration of pay parity and safe staffing," she added.

He said: “I add my best wishes and support as someone who has, in recent times, been receiving extraordinary medical attention in Altnagelvin Hospital from outstanding doctors and nurses.”