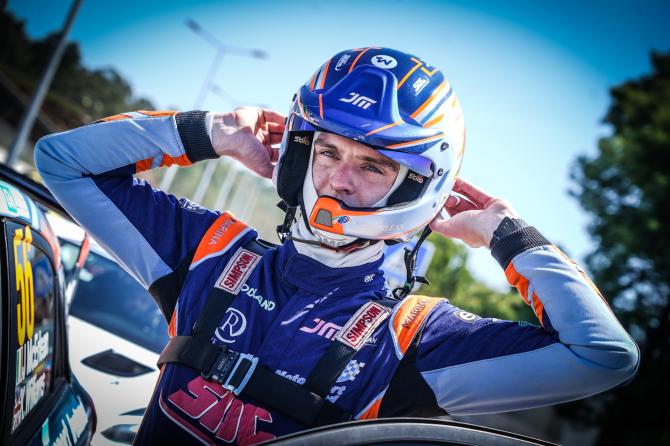 HYUNDAI Motorsport Customer Racing Junior Driver Josh McErlean secured a sensational third overall at Rally di Alba earlier this month, with the Motorsport Ireland Rally Academy ace citing the result as ‘a big step’ in his career at the popular Italian asphalt event.
Piloting a PCRS Rallysport run Hyundai i20 R5, McErlean and co-driver Keaton Williams set a string of top-three times throughout the 100-kilometre event in the Italian Alps to beat many local experts on home soil under the watchful eye of Hyundai Motorsport Team Principal Andrea Adamo who was present at the event.
“It’s fantastic to come back to Rally di Alba and take such an amazing result,” said McErlean.
“It’s a testament to all the hard work I've been putting in recently and of course to all those that have supported me throughout. It feels like it has been a big step in my driving and performance and to do that at Andrea’s [Adamo] home event makes it even more special”.
The 21-year-old from Kilrea is no stranger to the rally, having contested the event in 2020. Still getting to grips with the potent Hyundai i20 R5 at the time, McErlean took 17th overall on that visit but professed to enjoy the mountainous roads and flowing but technical nature of the stages.
His last outing saw him tackle the gruelling gravel of the FIA World Rally Championship counter Vodafone Rally de Portugal last month where he secured his best-ever World Championship result with fifth in the WRC3 category.
It didn’t take McErlean long to be on the pace of the Italian championship aces with third fastest time in shakedown on Saturday a sign of things to come from the Motorsport Ireland Rally Academy driver.
His blistering pace continued across the first loop of stages on Sunday. A trio of fourth fastest times saw him lie just outside the podium positions but perhaps more impressively, second in the R5 class, with the more powerful WRC machinery ahead.
The second pass saw McErlean move up into third overall and thanks to his performance out of the blocks during the morning's tests, he was able to return a controlled drive over the closing stages to return to Alba to spray the champagne later that night.
“I`m really pleased with the pace we have shown this weekend and when you look at last years stage times against this year, I can see how much I have improved over the last 12 months and that’s critical to my progression,” said McErlean.
“It was all about managing that pace as well, so we had to drive with our heads and deal with being in a podium position, that’s not always easy but it was a great feeling to know we dealt with the situation perfectly.
“I'm very excited to be heading back to the FIA European Rally Championship and Italy in July as we tackle the Rally di Roma Capitale. So this weekend was the perfect preparation and has set us up in the right direction.
“Everyone is working hard on this project and I`m indebted to them for their unrivalled support of my career. To have the Motorsport Ireland Rally Academy behind this project is phenomenal and we will keep working hard; there is plenty more to come.”