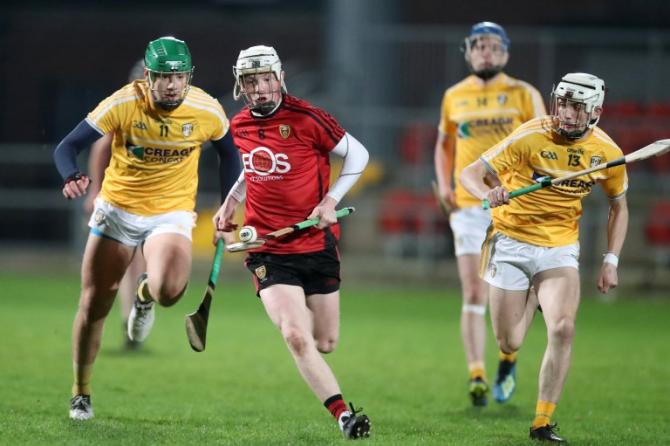 A COUPLE of first half goals from Seaan Elliott and Conal Bohill paved the way for this Saffrons success as under 21 hurling was replaced by players a year younger.

Antrim produced display of sharp, crisp, pacey hurling at Páirc Esler in Newry to see off the challenge of Down in the Leinster Under  20 championship play-off.

While Down may have been short a few regulars that takes  nothing away from a great display from the Antrim lads. Their precision passing, striking and score taking were superb and while there may not have been any preparatory work done in the build up to this game it certainly didn’t show as the hit some excellent scores  to book a place in the Leinster Championship against Carlow in eight weeks time.

Assistant manager Gary O'Kane was well taken with what he witnessed. “They actually have surprised us  with how well they played together,” he admitted.

“Believe it or not we haven’t had any collective training to date, but a number of them are in the senior panel and we would be pleased with their progress.

“However the team play was very good, striking top class, movement off the ball and the awareness of where each other was, you couldn’t ask for better. It gives us an excellent platform to move forward.”

The young Saffrons had started well hitting a series of great points but their hopes were dealt a blow when down full forward Ronan Blair grabbed a goal in the thirteenth minute. However the result was never in any doubt after Seaan Elliott fired a penalty to the Down net in the five minutes later for the Saffrons’ opening goal to give his team a 1-7 to 1-2 lead.

Blair’s major was very much against the run of play as Seaan Elliott hit three early points and along with his Dunloy club-mate Declan Smyth were dictating play around the midfield.