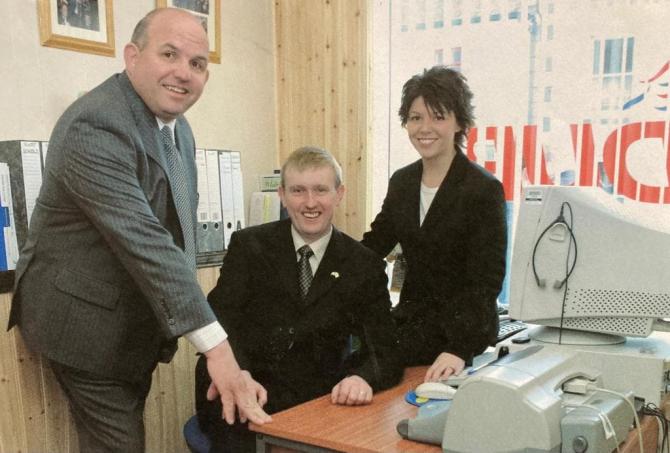 John Finlay, left, with Mervyn Storey seated, early in both their political careers, opening the Ballymoney office, with Joanne.

JOHN Finlay was a DUP party stalwart who reflected many of the views of the traditional wing of the party, topping the poll twice in the six times he stood for election.
In his candid interview with this paper, just days after his terminal diagnosis, he said:
“I became a councillor on 11 November 1998, that's 24 years ago, a long time.
“I have never regretted my time in the council or the DUP. People tell me, scratch me and I'll bleed DUP.”
Over the years he had shown himself unafraid to both defend party colleagues against immense outside criticism or criticise them himself, if the issue demanded.
As Chairman of North Antrim DUP he stood firmly behind MP Ian Paisley during the latter's suspension from parliament in the wake of the Sri Lankan holiday affair.
His party going into government with Sinn Féin couldn't have sat comfortably with someone of his views, yet his loyalty to the DUP was more powerful than any personal reservations he might have had.
He strongly criticised Arlene Foster when she went to a GAA match in 2018.
John Finlay first stood for Ballymoney Borough Council in Bannvalley DEA 1997, but failed to be elected.
He become a councillor in November of the following year.
He was elected successfully in 2001, serving briefly as Deputy Major that year.
He was re-elected in 2005, serving as Mayor for three years in a row between 2006/07 and 2008/09 and again in 2013, the final year of Ballymoney Borough Council.
He topped the poll in the final election for Ballymoney Borough Council in 2011, and for the first election for the new Causeway Coast and Glens Council, in the new Ballymoney DEA, incorporating much of his old Bannvalley DEA.
He was re-elected easily in 2019, and was to have served as Mayor this year, 2022/23, but was unable to due to his worsening health.
There is already speculation about who will replace Alderman Finlay on Causeway Coast and Glens Council.
These are substantial shoes to fill, in the context of Ballymoney politics.
The obvious choice would be MLA Mervyn Storey, who lost his seat in the May assembly election. However, the Chronicle understands that there will be process, allowing for other potential DUP people to be co-opted, before a person is selected.

For tributes made at last week's council meeting and full coverage of his funeral service, see next week's Chronicle, out Tuesday morning.