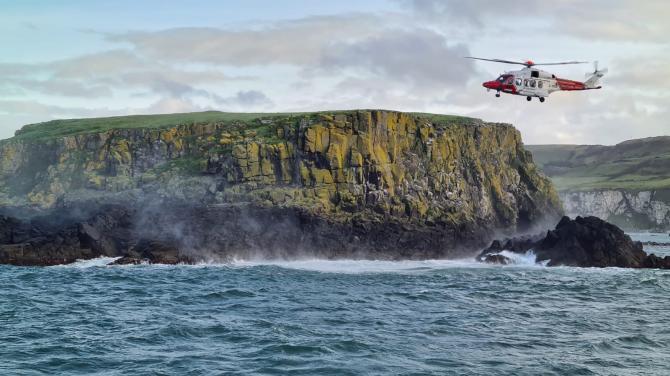 TWO paddle boarders swept off shore in highwinds on Sunday have been rescued by a Coastguard helicopter.

The pair were left stranded on Sheep Island close to Ballintoy Harbour.

A PSNI helicopter, a Coastguard rescue helicopter, Coastguard teams from Ballycastle and Coleraine, and RNLI lifeboats from Red Bay and Portrush were all called to the incident at around 3.30pm.

The two people were winched to safety and the operation ended two hours later.

A spokesperson for RNLI Portrush said: “By the time all lifeboats arrived on scene, the paddle boarders had been able to get onto Sheep Island.

“Sea and weather conditions prevented the ALB (All weather boat) crew launching the Y-boat from the boat.

“By this time the Coastguard helicopter was on the way and the ALB, along with Red Bay RNLI, were asked to standby until the casualties were recovered successfully off the island and handed over to Coastguard shore crew.”

Sinn Fein Councillor Cara McShane, who has lived in Ballintoy all her life, said a disaster had been averted in the village thanks to the quick and efficient response from the emergency services.

Speaking on Sunday evening, Cllr McShane said: “I would like to praise the response of the blue light services and the two helicopters, the Coleraine/Ballycastle Coastguard teams, the Portrush lifeboats, the ambulance service and the police helicopters, who were able to land at the Church of Ireland just on the fields on the approach down to Ballintoy harbour,” she said.

“We're in the middle of October, this was a huge rescue operation and thankfully those people were saved.

“I would use this incident as a reminder to people to be cautious of the sea.

“We need to be cautious all year round but we're now moving into the winter.

“The sea is unforgiving and huge resources were tasked today and I would just like to pay tribute to all of those who risked their own lives to ensure that a disaster was averted this afternoon at Ballintoy.”