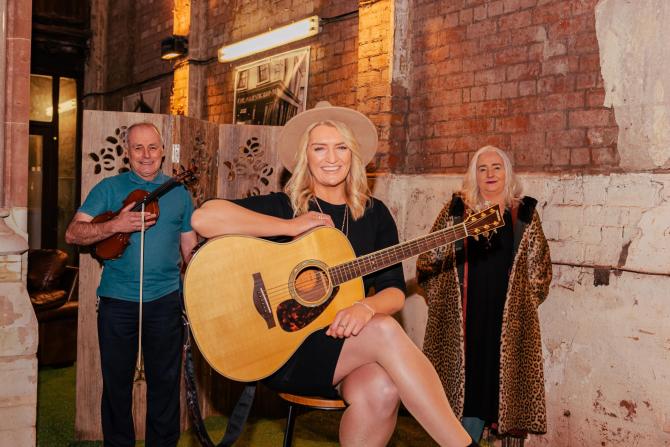 With a packed schedule of music, dance and art it represents a unique to celebrate the Patron Saint as well pay tribute to the work to restore St Joseph’s as a community hub.

Project manager for Sailortown Regeneration, Terry McKeown said it was important that they were able to share this landmark occasion for Sailortown.

“We are delighted to have such a stellar line-up that we can broadcast to friends, near and far” Terry said.

“The years of campaigning and hard work to open St Joseph’s deserve to be celebrated and we can promise that it will be a packed day that will have you not wanting to miss a minute.”

Several performances will be live broadcasted from St Joseph’s across two stages and all the acts will be introduced by U105 presenter and DJ, Johnny Hero.

A feature during the day will be the presentation of a video on Sailortown, recounting the history, and the battles to win the lease when the church was deconsecrated through to the ongoing work.

Simon Wood, Chairperson, Northern Visions TV said: “We are delighted to be able to support the Sailortown community and former residents on St. Patrick's Day, they say that sometimes you will never know the true value of a moment until it becomes a memory, let us hope that the enthusiasm of those intent on saving what is left of this community brings a brighter future."

Singer songwriters Amanda St John and Anthony Toner will be among the line-up. Anthony, who released his song Sailortown in 2008, said: “St Joseph’s is a beautiful building, the atmosphere of churches is always welcoming to musicians, I think – there’s a sense of the music rising up into the rafters that you don’t get in more traditional venues.

“The history of that part of the city adds another layer of importance to the place, and the exciting plans for its regeneration make it feel multi-layered, the past and the future of Sailortown collide right here, in this space, right now.”

Singer songwriter, Ludwig O’Neill, is no stranger to Sailortown having campaigned to keep the Rotterdam and Pat’s Bar from development, will bring his dark, realistic folk and blues tunes to the party.

He said: “I am very pleased to have been included in this St Patrick’s Day event almost a year since I played there before.

“Sailortown is in my blood, it’s the heartbeat of North Belfast and over the years has been Belfast’s conduit to the rest of the world. St Joseph’s chapel has long been the spiritual hub of that area.”

Details of the line-up can be found at sailortownregeneration.com  or on Sailortown Regeneration Facebook page.

Catch the live broadcast on 17th March on….