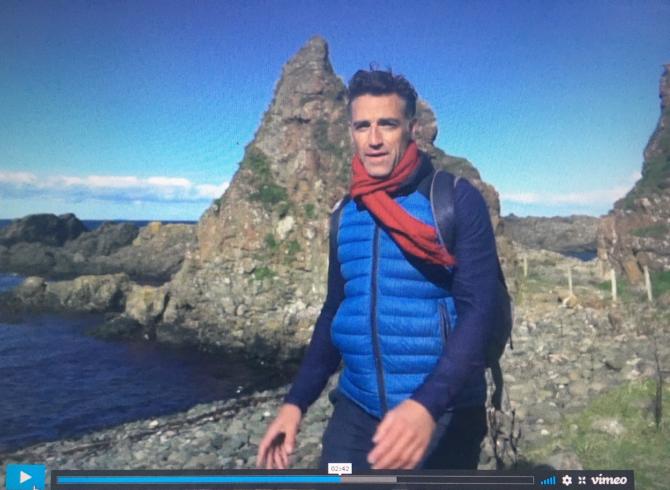 Screen shot of Graham Little on the walk between Whitepark Bay and Dunseverick.

DUNSEVERICK'S very own Ulster-Scots poet has not been included in a new Ulster-Scots walking video about Dunseverick it has emerged.

'Dunseverick' is one of the five walks featured in the newly released 'Danders Aroon Northern Ireland with Graham Little' produced by NPE media with the support of the Ulster-Scots Agency.

Chronicle Journalist Alan Millar said: “Having had the pleasure of editing the re-published version of John McKinley of Dunseverick's poems in 2014, to feature an Ulster-Scots walk, without even mentioning his name, seems a quite unbelievable omission.

“John McKinley lived in the early part of the 19th Century and styled himself 'McKinley of Dunseverick', publishing the first of his volumes of poetry in 1819.

“He was born and reared on this stretch of coast and often wrote about it, referring to historic figures and landmarks visible in the footage used.”

Asked to explain why he had been excluded, The Ulster-Scots Agency told The Chronicle “the level of detail possible within the project scope was limited,” but added they “would be delighted” to include additional Ulster-Scots content on their new website and would “welcome suggestions.”

Alan continued: “The video has many qualities and couldn't be faulted for showing off the spectacular north coast in an informative modern visitor friendly manner.

“However the historic aspect is confined to the Kingdom of Dalriada, and even in ‘additional content’ that promises to ‘delve even deeper into the heritage of the area,’ there is no mention of the local bard.

“Surely the piece where Dr David Hume's discussed basic Ulster-Scots words would have been a perfect time to 'delve' into some of McKinley's vernacular poems?

“McKinley wrote about this section of coast and in great detail, both in Ulster-Scots and English, referring to many local traditions, the Salmon Fishery, Gaelic mythology, Rathlin Island, Mt Druid House in Ballintoy, proximity to Scotland, ancient stories and much more.

“Surely it would have been worth mentioning his description of the northern lights 'dancing on Lochindael'; the bay visible on the west side of the Isle of Islay!”

We asked the Ulster-Scots Agency (USA), and NPE media for an explanation with, Richard Hanna, Director of Education and Language at the USA saying:

“This is an independent production by NPE Media Ltd for NI Screen working in partnership with WalkNI. It is not an Ulster-Scots Agency production although the Agency is very pleased to support the work.

“The scope of the project was to raise awareness of a range of accessible walks in areas with Ulster-Scots interest in very short film format. The level of detail possible for each of the areas within the project scope was limited.

“All of the areas in which the walks are focused have many Ulster-Scots links, not all were able to be featured in the short films.

“The project is designed to raise awareness about a small number of areas in Northern Ireland with Ulster-Scots interest and to engage new audiences and encourage them to find out more about the places featured.

“The Ulster-Scots Agency is currently developing a new ‘discoverulsterscots’ website and ‘Danders Aroon’ will feature on that.

“This would be an excellent opportunity for us to expand on the content for each location covering detail and broadening scope not possible within the NPE project.

“I would be delighted to include additional Ulster-Scots content on our new website about all of the areas featured and would welcome your suggestions for the Dunseverick region.”

The videos can be found on WalkNI.com and are designed to take them with you on your walk adding interactivity to the experience.

The walks are less than 5 miles long and include Donaghadee, Islandmagee, Belfast Lagan and Delamont as well as Dunseverick.