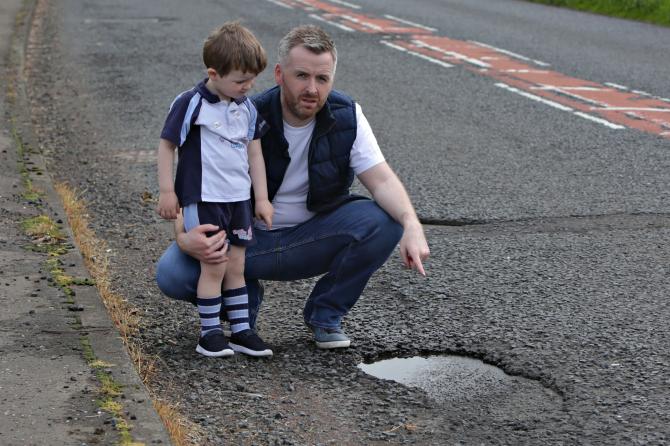 Cllr John McAuley, pictured with his son Alfie, pointing out potholes and general road surface issues in Dervock back in the Spring of 2019. WK23KC31BM

NEWS that Dervock main street is to be resurfaced has been welcomed by a local councillor and a community representative, though it seems that a notorious section of the Knock Road on the Ballymoney end of the village, will have to wait for another time.

Commenting last week DUP Cllr John McAuley said a scheme to resurface to the length of the village, from Castlecatt Road back to the 30mph signs on Knock Rock has “been approved and designed and that it is now a high priority project with contractors being instructed to complete the work as soon as funding is available. Realistically this will most likely be early 2021!”

Local community activist Mr Steven Phillips, thanked Cllr McAuley on behalf of Dervock residents for “carrying on the fight with regard to the much needed update. The residents have been asking for this dangerous road to be made safe and the work announced will go along way to achieving this!”