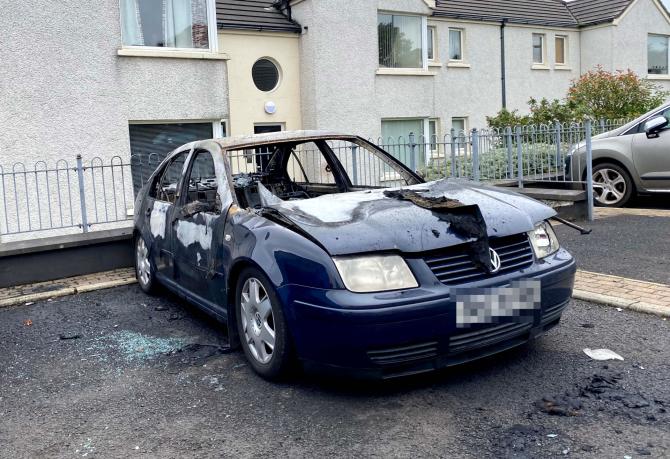 Police are appealing for information after a second arson attack in Ballycastle.

Police are appealing for information following a report of arson which occurred in the early hours of this morning (Wednesday 16th September).

Inspector Roxborough said:  “Shortly after 1:35am, it was reported that two masked men approached a blue coloured VW Bora parked at the Boyd Court area of Ballycastle and smashed the windows of the vehicle. The men then placed something inside and set it alight, which completely destroyed the vehicle. A blue coloured Skoda Rapid which was parked near to the other vehicle was also damaged during the incident.

“Shortly after 9:50am on Wednesday 16th September, it was reported to police that a car was found completely destroyed at the Isle Road area of Bushmills. Police are working to establish the circumstances surrounding this incident.

“Enquiries are continuing and at this stage, police are not investigating a link between either of these incidents and a report of arson which occurred in the Leyland Drive area of Ballycastle on Tuesday 15th September.

“We would appeal to anyone who witnessed anything suspicious in either of the areas at the times of each incident, to contact police on 101 quoting reference number 112 16/09/20. A report can be made using the online reporting form via www.psni.police.uk/makeareport. Information can also be provided to Crimestoppers anonymously on 0800 555 111 or online at www.crimestoppers-uk.org"