Whelan etches his name alongside the greats at Mullingar 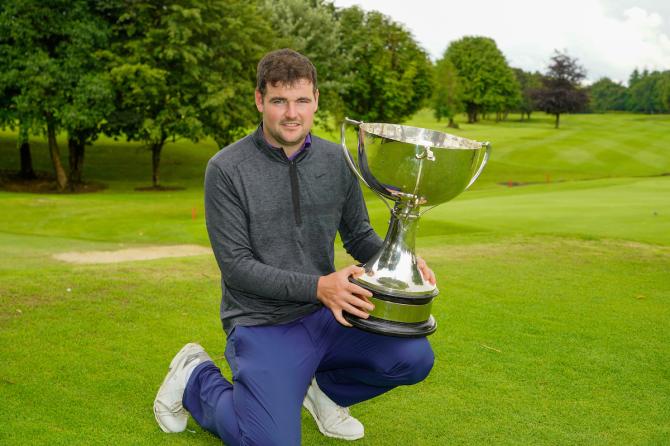 Grange’s Jake Whelan has etched his name among some of the greats of Irish golf after claiming a one stroke win at the 2021 Mullingar Scratch Trophy.

Taking a one-stroke advantage into the final round after a 68 in the morning, Whelan held his nerve during a nail-biting finale to post a second consecutive 68 for a 15-under par tournament tally and a one-shot win over gutsy runner-up TJ Ford, who closed with a 68 of his own.

“I would have known the names on it anyway,” Whelan laughed when asked if he had looked at the company he was joining in capturing the famous trophy.

“There’s so many great Irish players on that trophy so obviously it’s great to get my name alongside them.”

Achieving that feat proved no easy task on Monday afternoon, however, as Whelan dropped shots at 7 and 8 to reach the turn tied at the top alongside Co. Sligo’s Ford and Enniscorthy’s Paul Conroy at 11-under par.

Undeterred, Whelan fired a fine approach to the heart of the tenth green to regain his one stroke lead before extending his advantage after a miracle birdie from the trees left of the par-4 11th.

“I hit a terrible drive but I had a gap in the trees so I was lucky enough,” said Whelan, who found the green to leave a lengthy birdie try. “I had to take the shot on but obviously the putt going in was a big bonus.”

A bit of fortune perhaps but Whelan’s Houdini act served as an arrow to Ford and Conroy with the former failing to get up and down in bogey and Conroy’s challenge coming to an abrupt end with a costly double.

That left Whelan out in front by three before Ford brilliantly negotiated hanging branches with his approach on 13 to set up a birdie and reduce the deficit to two. He then nailed a two-putt birdie at the par-5 14th as more tree trouble meant Whelan could only get up and down from the greenside bunker for par.

Suddenly within one, Ford had the bit between his teeth, arrowing his approach to the 15th as Whelan responded with a fine approach of his own.

The fate of the trophy had become a straight shootout between Whelan and Ford – the latter going first and dispatching his birdie putt as Whelan’s attempt from eight feet slipped past and with it his lead; now tied at the top with Ford playing the 16th.

Again Whelan found tree trouble left, forcing a lay-up as Ford found the par-5 green in two. His two-putt birdie piled the pressure on Whelan whose putter failed him again from around ten feet.

One shot to the good with two to play, for all those watching it looked as though momentum had shifted to last week’s South of Ireland Champion when it was Ford’s turn to find tree trouble left of 17. His approach came up short right while Whelan, who went down the eighth fairway with his drive to take OB out of play, played a fine second over the pin.

Ford’s chip left him with work to do for par; a task that became much more difficult when Whelan nailed his 20-footer for birdie. It would prove another two-shot swing with Ford’s par putt missing.

With a one-shot lead intact once more, Whelan striped his drive down the 72nd fairway as Ford came to rest in the right fairway bunker. Forced to take on the shot from some 200-yards out, Ford found the creek guarding the green at the par-5 but miraculously, his ball hopped back out onto dry land.

190 out with a one-shot lead, Whelan went on the offensive.

“I wanted to lay-up but I was only 190 out, so I couldn’t,” Whelan laughed. “I was trying to hit it at the bunker with a draw having missed it right earlier but I hit a terrible shot.”

Left, going left, Whelan gifted himself a treacherous chip from a bare lie to the flag that he negotiated brilliantly, leaving himself a seven footer for the win as Ford, taking advantage of his fortune, chipped to three feet for a birdie of his own.

“I was fine over the putt – the chip I was more nervous about,” said Whelan. “It was a tight enough lie and I didn’t want to leave it short. I wanted to leave it inside ten feet and the putt was nice, outside right and thankfully it went in. Hopefully it gives me a lot of confidence now to kick on for the rest of the season.”

Whelan’s nerveless last stroke saw him join an illustrious list of past winners at Mullingar that includes the likes of Padraig Harrington, Shane Lowry and Rory McIlroy.

It wasn’t to be for champion at Lahinch, Ford, however, who paid tribute to Whelan after the pair put on a back-and-forth battle worthy of drawing the curtain on any championship. “Obviously disappointed but I played really well, Jake just played better,” said Ford. “Fair play to Jake. He played really well. His putting was awesome. He deserves the win.”