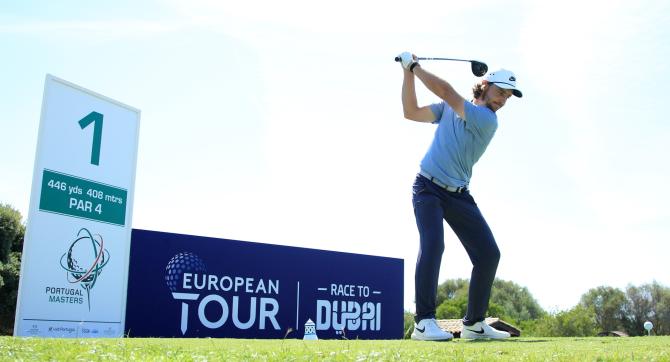 TOMMY Fleetwood is teeing it up at the Portugal Masters for the first time since 2016, and the Ryder Cup star is excited to be back at a regular European Tour event after the four month hiatus due to coronavirus.

Fleetwood played every edition of this event between 2012 and 2016, and the world number 16 will be looking to become the third Englishman in succession to lift the trophy at Dom Pedro Victoria Golf Course, following compatriots Tom Lewis and Steven Brown, before heading to the U.S. Open at Winged Foot next week.

Brown is also in the field this week alongside fellow former winners Lucas Bjerregaard of Denmark, Frenchman Alex Levy and Spain’s Alvaro Quiros, and he enters the week in a much more relaxed mindset after capturing his maiden European Tour title in Vilamoura last season. He could not have been under more pressure then, requiring at least a fifth-place finish to secure his card, and ultimately taking the title.

The newest European Tour winner is also teeing it up in the 14th edition of the Portugal Masters, with American John Catlin already aiming to add to the title he won last week at the Estrella Damm N.A. Andalucia Masters.

This week is the second of three tournaments in the 'Iberian Swing' as the European Tour continues the practice of grouping tournaments in regional clusters where possible, and follows two dual ranking events in Austria and the six-event 'UK Swing' since the resumption of the 2020 Race to Dubai.

This week also sees the continuation of the European Tour’s #GolfForGood initiative, with Vilamoura World and the European Tour teaming up to donate €200 for every birdie and €500 for every eagle scored on the par five 17th at Dom Pedro Victoria Golf Course to be split between  two local charities – Existir and APEXA – and EDGA (formerly the European Disabled Golf Association).

“It’s great coming back and seeing everybody that you have played with for a long, long time," said Fleetwood.

"The European Tour definitely, for us that have grown up on the Tour, it has a beautiful atmosphere to it. Obviously, we are in a bubble right now but as soon as you come back it has a feel about it that is really, really nice.

“The Portugal Masters was an ideal opportunity to get some competitive golf in and come back on the European Tour. I have never had a run at the tournament, but I have always enjoyed coming here. I think the hotel is great, the course is different this year – there is a bit of rough up – so it is a tougher test, but I just think it was the perfect scenario for me.

“I haven’t played particularly great for a few weeks and I have gone back and worked on a few things. I have always preferred getting to Majors early but this year clearly things are very different and things change and get thrown out the window.

"I have never ever been to a tournament where I haven’t wanted to win and this week is exactly that, I want to go out this week and compete absolutely but I think you gain from certain shots you hit, and you only figure those things out by playing competitively.”