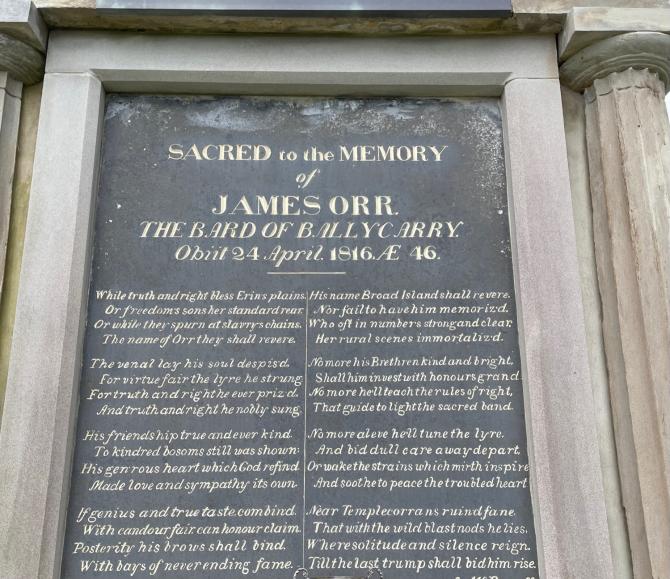 The monument to Ulster-Scots poet and United Irishman James Orr in Ballycarry.

THE QUEEN'S speech of Tuesday (May 10) outlined the government's plans to bring forward the much awaited Identity and Language (Northern Ireland) Bill.

This controversial piece of legislation includes what is commonly called the Irish Language Act and other legislation “to enhance and develop the language, arts and literature of the Ulster Scots and Ulster British tradition,” as agreed in NDNA in 2019.

Last year disagreements, blamed squarely on the DUP, by Sinn Féin, caused Westminster to undertake to introduce the Bill if Stormont did not.

Delay after delay has followed on from this commitment; one of the most recent apparently caused by Sinn Féin objections to the name of one of the Commissioners.

Following that, the period in the run up to an election was deemed unsuitable by NIO.

Now with the election over us, pressure on the government to live up to this commitment will be ramped up by Sinn Féin and Irish Language groups.

They have cautiously welcomed the presence of the proposed Bill in the Queen's Speech.

No details were furnished in the Queen's speech, read out by Prince Charles.

However the 'Queen's speech 2022: background briefing notes' (pages 124/125) go into more detail and are reproduced in full below.

Note that Ulster Scots and Ulster British are joined at the hip in these 'briefing notes' despite the curious story that broke in February claiming Sinn Féin had objected to the Ulster British part of the proposed Ulster-Scots/Ulster British Commissioner.

However the actual name of the Commissioner for things Ulster-Scots and Ulster British is not mentioned.

These 'briefing notes' also do not resolve the difference pointed out on P25 of the Ulster-Scots Advisory Panel Report Consultation, between the Ulster-Scots language, heritage, and culture terminology,which reflects the broad human rights framework; and the NDNA terminology of language, literature, and arts.

The purpose of the Bill is to:

● Deliver a carefully balanced package of identity and language measures as negotiated by the Northern Ireland parties under the New Decade, New Approach Deal. This will recognise and celebrate Northern Ireland’s national and cultural identities and accommodate cultural differences.

● Enhance and develop the Ulster Scots/Ulster British tradition in Northern Ireland and recognise and protect the Irish language.

The main benefits of the Bill would be:

● Upholding a key element of the New Decade, New Approach Deal by legislating to deliver a new cultural framework to encourage reconciliation, tolerance and meaningful dialogue between those with different national and cultural identities.

● Ensuring appropriate support for the respective needs of the Ulster Scots/Ulster British tradition and of the Irish language in Northern Ireland.

● Providing a basis on which Northern Ireland can move forwards on matters of national and cultural identity.

The main elements of the Bill are:

● Creating a new Office of Identity and Cultural Expression that will provide guidance for public authorities on a series of national and cultural identity principles set out in the New Decade, New Approach Deal.

o a new Commissioner who will enhance and develop the language, arts and literature of the Ulster Scots and Ulster British tradition in Northern Ireland. They will do this by providing guidance and advice to public authorities, and distributing publicity material; and

o a new Irish Language Commissioner to protect and enhance the use of the Irish language and develop a set of best practice standards for public authorities in Northern Ireland.

● Providing official recognition in law to the Irish Language in Northern Ireland and repealing the Administration of Justice (Ireland) Act 1737.

● Placing a duty on the Northern Ireland Department of Education to encourage and facilitate the use and understanding of Ulster Scots in the education system.