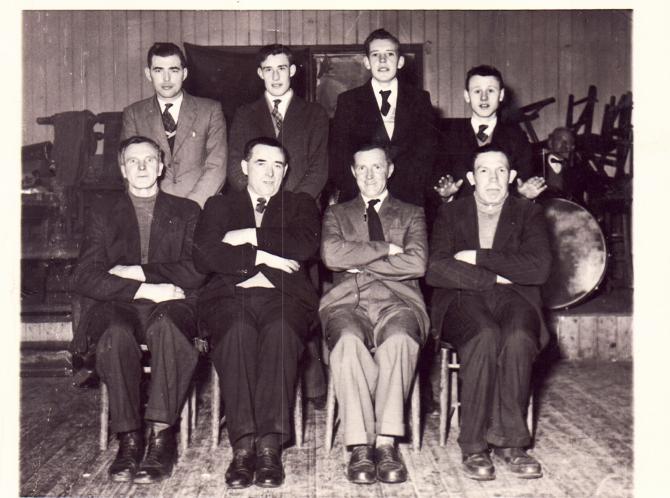 THE above picture, kindly supplied by Mr Eneas Rainey, and run in the Jan 27 Chronicle, was taken in 1955 and is of the committee on the stage of the Reading Room in Stranocum.
It was an old wooden building, where the new Huey Memorial Orange Hall now sits in the village.
This is quite an amazing picture in its own way, recording as it does the tail end of a fantastic rural tradition going back nearly 200 years.

Reading Rooms were once a common part of Ulster rural life, with one of the first started by Wullie Galt at Doagh in the 1780s.

This had one of the greatest libraries in rural Ulster at the time, the site of this also now where the village Orange Hall sits.

Rev James Porter, Minister of Greyabbey, hanged in 1798, gave one of his talks there on science and electricity.

Thomson was probably a founder member of the 'Four Town's' Reading Room (or Book-Club) near Roughfort, whose history was penned in an article in Ulster Archaeology by the late 19th Century Antiquarian Francis Joseph Bigger.

Reading Rooms allowed poor men access to newspapers and books and this helped make them into hotbeds of political activity during the period running up to and after the 1798 Rebellion.

Doagh was attacked an burned by the army during 1798.

They apparently took a particular dislike to a very thick and hard-backed copy of Gibbon's Rise and Fall of the Roman Empire and tried, unsuccessfully, to both burn and slash it to death.

By the end of the 19th Century F.J. Bigger notes that such clubs, were noted more for the drinking and brawling.

This was certainly not the case in Stranocum.

The origin of the Stranocum Reading Room hall went back into the 19th century, with the site donated by the McNaughtons.

Eneas said the purpose of the committee was to organise competitions, with darts, bagatelle and billiards being played. Draughts and cards were also played.
Newspapers were available, with some members sitting by the big stove, to read them.