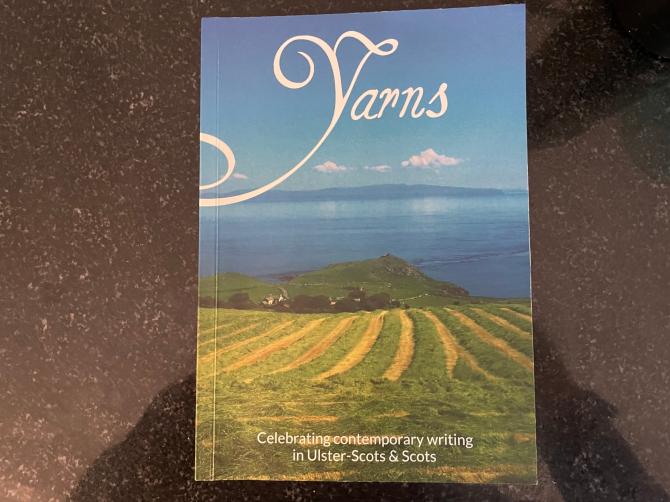 FOUR local writers have been included in a cutting edge new anthology of contemporary Ulster-Scots poems, 'Yarns', produced by the Ulster-Scots Community Network.
Ballymoney Chronicle journalist Alan Millar joins Ulster-Scots elder statesman Charlie ‘Tha Poocher’ Reynolds, from Coleraine, Garvagh's Anne McMaster and Ballycastle's Angela Graham and a host of other writers, including a few from Scotland.
Commenting, Head of the editorial team, Research Director for English Language and Literature, Ulster University, Dr Frank Ferguson, said: “I'm delighted to have been one of the editing team for this volume.
“The collection demonstrates a real flowering and expansion of creative writing in Ulster Scots and Scots at this time. It is a pleasure to bring to the public's attention so much innovative and enthralling work.”
Charlie ‘Tha Poocher’ Reynolds said: “Mann it dane mae hert guid whun a seen anither wee buik o rhymes an blethers in oor guid oul native tongue.
“Aff coorse am taakin aboot  ‘Yarns’. The hale thing wus the wurk o scrievers fae aroon oor wee country an ower the sheugh in Scotlan.
“A hope this is a guid omen o things tae come an we wull shane see a hale lot mair o buiks pittin forrit oor ain tongue for A beleeve it’s a big part o oor Ulster Scots culture.”

POET
Anne McMaster is a Pushcart-nominated poet, playwright and former farmer who lives outside Garvagh on the family farm.
She said: “It’s a privilege to have my work accepted for ‘Yarns.’ This is a vital new anthology that captures the energy and voices of those who write and speak in Ulster Scots.
“As an emerging writer in Ulster Scots, it’s inspiring and energising for me to have such a connection with those who share my love of this vibrant language and who have stories and poems to share - not only of past days and lives but also of present times.”
Commenting Angela Graham said: “It’s an honour for me to have two of my poems included and an extract from the novel I’m writing. Seeing the wide range of style and subject-matter is a great encouragement to me to write more ambitiously in Ulstèr-Scots.
“I’d like to see the profile of Ulstèr-Scots writing become more visible alongside other contemporary work from our part of the world. I feel lucky to be writing in Ulstèr-Scots at a time when there’s real impetus and, I have to say, joy giving it a headwind.”
Alan Millar said: “I'm very happy to have two poems included in this collection, which will undoubtedly be regarded as an important milestone in the development of contemporary Ulster-Scots.
“My poems ‘Religion River’ and ‘Wullie Whun wha Loost his Jeg’, try to address indirectly and symbolically aspects of our divided society. I feel Ulster-Scots is an excellent medium for doing this!
“In the wider sense, this renaissance in Ulster-Scots has been quietly building behind the scenes for quite a few years, nurtured by bodies such as the USLS and others, and is now starting to bare fruit.”