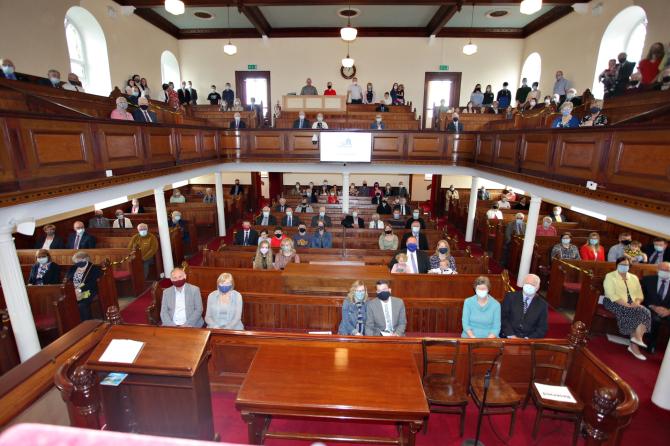 THE Congregation of Dervock Presbyterian had a thanksgiving service to mark their 375th Anniversary on Sunday June 6.
Dervock Presbyterian Church is situated half a mile outside of the village of Dervock in the townland of Carncullagh. Our purpose is “Making & Maturing Disciples of Jesus.”
The congregation was formed in 1646 under the ministry of the Reverend John Baird. In 1646 the village of Dervock was a military station occupied by the Earl of Argyle’s regiment under the control of Colonel Sir Duncan Campbell.
The Reverend John Baird was chaplain to this regiment.
Dervock first meeting house was near the Straham River. It was a very simple building built out of stone and mud. It was roofed with bog fir.
In the Congregations 375 years they have had sixteen ministers.

During Joseph Douglas’s ministry (1751-1789) the church was moved to its current site on the Carncullagh Road. Lord Macartney owned the land and therefore gave the congregation an acre of ground in perpetuity at the annual rent of five shillings per annum and in 1766 the new church was built.

ONE OF THE FIRST
In 1835 under the ministry of Joseph Bellis (1827-1872) the original church on the present site was removed, and the present church built. Almost £500.00 was subscribed by the congregation in less than one month.  The new church building was thought to cost just over £900.00 and when the new church opened the congregation were only a few pounds in debt.
It was during the Reverend Alexander Field’s ministry that the present manse “Mansefield was built (1877-1878). Alexander Field did a preaching tour of America to raise the necessary money to build the manse. His preaching tour was so profitable the Reverend Field enabled the Congregation to totally renovate their meeting house and build a Church Hall in the years 1887-1888. Dervock was one of the first Congregations in the Route Presbytery to have a Church Hall.
Reverend Field was Clerk of the Presbytery of Route for a number of years. During his ministry in Dervock, he was recognised by the Presbyterian Theological Faculty, Ireland, by being awarded the degree of Doctor of Divinity.
The Rev John Pyper was minister of Dervock from 1904-1912. He was a man of skill. He was not just a preacher, he was in fact a possession footballer. He and his two brothers played in Ireland’s national football club.
Throughout the Congregation’s 375 years, ten men from the Congregation were ordained into the ministry of Word & Sacrament. Over recent years there have been a few people within the congregation who have entered missionary work.

BOOK
Dervock Presbyterian Church Secretary, Mr Dave McQuilken is currently writing a book on the history of the Church, over its 375 years. This book will be published later on in the year.
Previous ministers, wives, and families were welcomed back to the 375th Anniversary Service. Dr James Thompson led the congregation in prayer while the Reverend Scott Moore read Psalm 136.
The newly appointed Minister of the Congregation, the Reverend Campbell Mulvenny preached from Psalm 136. The Reverend Mulvenny main point within his sermon was that “God’s love and mercy continues forever with his people.”
The Reverend Mulvenny pointed out to the Congregation how God’s love and mercy is seen through the Sovereignty of God in His works of creation and redemption. God in His grace and mercy has remembered us in our low estate. God in His grace and mercy sent His Son the Lord Jesus Christ to deliver us from our sin and misery. God in His loving kindness meets our greatest need through the Lord Jesus Christ.