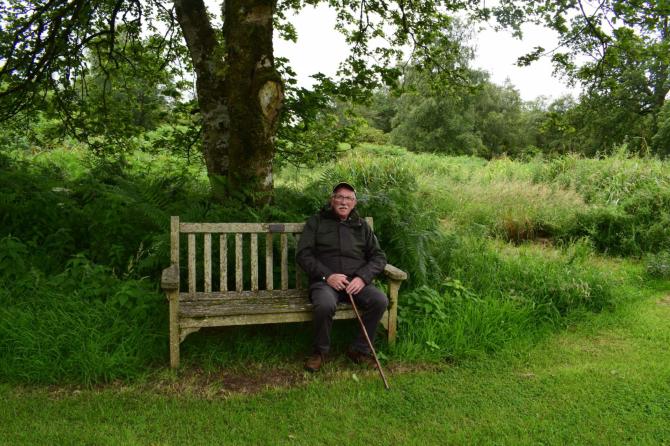 FORMER Chronicle Ulster-Scots columnist Charlie ‘Tha Poocher’ Reynolds has just published his latest collection of poetry ‘A Heirskip Loast’ (a heritage lost), expressing his hope that it will help people cherish "a part of who we are."
Published by the Ulster-Scots Academy Press (USAP), the collection contains around 40 poems an wee prose pieces written in the 'Hamely Tongue', building on his first collection ‘Mae Granfeyther's Tunge’ published in 2002.
He also featured with other  Ulster-Scots writers in ‘North Antrim Connection’ published some years later.
Dr Philip Robinson of USAP said that Charlie’s book  "turns nostalgia into a celebratory record of Ulster-Scots as a ‘leevin language’ as well as a ‘hamely tongue’”
Commenting, Charlie said: “The book is wrote in my own North Antrim native tongue which is sadly fading away into obscurity.
“I hope this simple wee book creates some interest in what I believe is part of who we are and should be cherished by all who would have any connection to the Ulster Scots community.”
Asked how the collection came about Charlie said: “I was asked by the Ulster-Scots Academy if I would mind doing a wee book of my poems and writings.
“I thought why not and was surprised by the request. It was Dr Philip Robinson who suggested the title as I had written a wee rhyme called ‘A Heirskip loast’.
Charlie, who lives in Ballysally, can trace his family connections back 300 years to the Armoy area. It was therefore entirely fitting that the front cover picture was kindly supplied by Armoy musician Dick Glasgow.
“I am indebted to Dick for supplying the cover picture of winter scene from lovely Armoy where I can trace my family tree back to the early 18th century,” he said.
Commenting, Dick said: “I have always enjoyed Charlie's rhymes, often including them in the wee column I used to write for a local paper, so I was delighted to be asked to provide a suitable photograph for the cover of his new book and I wish it every success.”
Dr Philip Robinson of the USAP, described Charlie as “one of the original 'Aul Hans' of the Ulster-Scots Language Society, writing for more than 20 years.
Commenting, Dr Philip Robinson said: "Charlie Reynolds Ulster-Scots writings are straight from the grass roots - authentic, natural, originally pioneering and straight from the heart.
“He is not only a confident native speaker of the North Antrim variety of Ulster-Scots, but he has been an active researcher, writer and supporter of the Language Movement since the early 1990s, if not before.
“In his second collection of Ulster-Scots Rhymes Charlie reveals his enduring passion for the language, traditions, history and culture of the grass-roots Ulster-Scots community in his ‘hame’ country between Benvarden and Armoy in North Antrim.
“As he reflects with dismay on the increasingly rapid erosion of the language and ‘heirskip’ (heritage) that was the norm in his grandparents’ generation, he turns nostalgia into a celebratory record of Ulster-Scots as a ‘leevin language’ as well as a ‘hamely tongue’”
Get your copy of the book by going to https://www.amazon.co.uk.