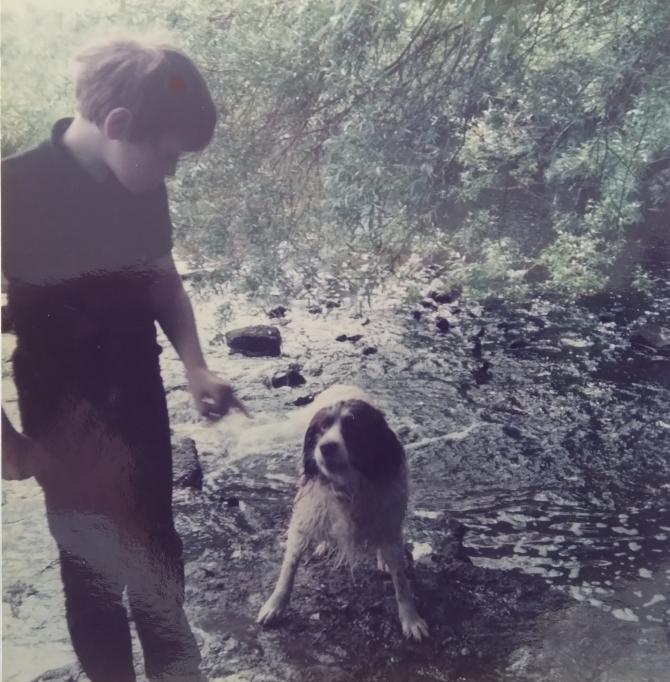 Robert standing in the River Lubach near Mosside with dog Prince in the mid 1980's.

LOCK  Doon Poyams is a debut collection of poems and a short story written by Robert Campbell during the Covid-19 Lock Down - though only a few are about the lock doon, and only one specifically mentions the “blasted bug”.
Robert, brought up mostly in Doagh, near Ballyclare, visited his grandparents in Mosside many times as a child, and has said that these visits have helped inspire him.
The poyams deal with the realities of life, educational underachievement and the challenges people face.
They also draw inspiration from nature, wildlife and the seasons. Lock Doon Poyams is written in the Hamely Tongue / Ulster Scots.
Poetically the words and cadence of speech can be described as 'Inver an Ollar wi aa touch oo Mo’side.' The Inver River flows through Larne; the Ollar, the old name for the Sixmilewater River, flows through Ballyclare, Doagh and Templepatrick, and Mosside is in North Antrim, the home village of the author's maternal grandmother. It is from these places the author’s residual understanding of Ulster Scots springs.
Robert said: “I’ve never lived in, or for that matter, near Mosside but it was somewhere I visited regularly with my grandparents as a child. My grandmother, Mina Morrison (nee Kelly) came from there, and my grandparents are buried in the Presbyterian Church graveyard.
“We visited her brothers (Frank, Jim and Davy). It was Davy who really stuck in my mind. He was a real local character.
“ Davy farmed, he was a bachelor, and lived in wee auld house off the street in Mosside.  The house was from a different age, it had a flat hearth fire with a big open chimney, and there was a gas mantle on the roof for light. It was like something from the Folk Park in Omagh.
“As a child the whole place was just amazing - the path down to the river with all the wee trinkets on the trees; the huge anvil in the barn; the farm animals and wildlife. As an adult I see this as a connection between the then and the now, what we were and what we were becoming.
“I remember being enthralled by the rolling lilt and cadence of speech, and the words. Those words that were so different from my own home.  But as I got older the words were around me; around Doagh and Larne and Ballyclare.
“Maybe Davy had just kept the words and rhythm of speech better than most.  He also wrote poems, and as far as I know some of them were written in his tongue, or as we’d describe it now, in Ulster Scots. When I started writing my poems, the words came in Ulster Scots - I hadn’t set out to write Ulster Scots poetry.
“ I think a lot of influences had finally come together.  Afterwards I gave a lot of thought to articulating what brought me to this point, and I believe the line, 'Inver an Ollar wi aa touch oo Mo’side’ sums it up really well!”
Lock Doon Poyams is available from Amazon.co.uk