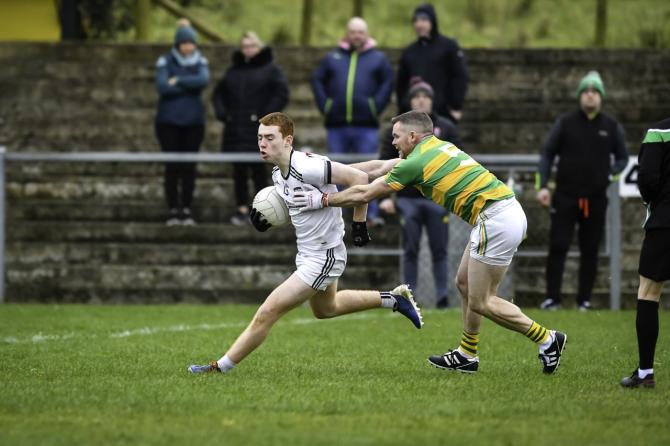 Glenullin make the short trip to Limavady this weekend.

Intriguing weekend of action in Intermediate and Junior grades...

Slaughtmanus v Faughanvale - Friday (7pm)
WHEN THESE parish rivals meet their games tend to be close and competitive even though Slaughtmanus seem to have fallen a bit behind the neighbours in the last few years.
Joe Gray has been experimenting a bit with the lough shore men and is probably not over anxious about the league.
Last year he put a lot into the league only to be thumped by Limavady Wolfhounds in the championship.
The Slaughtmanus team has undergone some changes in the last couple of years with retirements and injuries resulting in new faces coming in.
Faughanvale look to have more power in attack with Paddy O’Kane in top form and that could see them coming past Eglinton with the points.

Saturday - Drumsurn v Foreglen
Drumsurn, a team heading in the right direction since Sean Brady took over, will face a big test at home to Foreglen.
The O’Brien’s are hard to beat with players like Oisin Duffy and Mark McCormick to give inspiration to the younger players.
Drumsurn had a good away win over Faughanvale on day one with Tiernan McHugh excellent in attack.
However McHugh may be on duty with the county hurlers and that could rule him out. It looks evenly balanced.

Castledawson v Lissan
Lissan will be pretty pleased to have drawn with Limavady last day out.
Cstledawson got plenty of troubles from Slaughtmanus. Lissan have a lot of youth in their ranks with Ciaran Loane prominent.
Castledawson have always been a solid and well organised unit. They will be favourites at The Broagh but Lissan are on the way back up after a few difficult years.
Could even be another draw.

Limavady v Glenullin
Both finished level away from home in last week’s games but on balance Paddy Bradley’s Glenullin have made the better start to the season.
The Wolfhounds have height and strength in their ranks but Glenullin have the experienced, consistent and free scoring duo of Eoin Bradley and Dermot O’Kane to win games. Limavady have good players but do not always deliver. Glenullin get the nod.

Greenlough v Desertmartin
Desertmartin are finding the step up to intermediate a big one but they have been playing without their ace marksman Lachlan Murray who is in the Derry squad.
Greenlough have the free scoring Enda Lynn and a few other experienced warriors to keep them at the higher end of the league year on year. They may have too much know how for the St. Martin’s.

Magilligan v Ardmore
WITH CIARAN O’Hare in charge, Magilligan are having a decent season, a lot of it down to improved fitness levels.
Ardmore conceded to Ballerin last week but they will be probably back in running for this game.
With the ever impressive Collie Mullan at midfield it is hard to see anything other than a home win.

Ballymaguigan v Doire Trasna
Ballymaguigan are unbeaten so far this year but they will not get anything easy from Doire Trasna who ran Craigbane to a point in the last round.
Eoghan Quigg has been in fine tune for the Waterside men getting most of their scores against Craigbane.
If he gets a bit more assistance they are well capable of causing a surprise.

Craigbane v Ballerin
Both teams are unbeaten, Craigbane have three victories while Ballerin have a win, a draw and a concession.
Ballerin have a lot of injuries but traditionally are not far away in these clashes.
Fergal Mortimer is the key man in the home attack and unless Ballerin can put the shackles on him it is likely to be a home win.