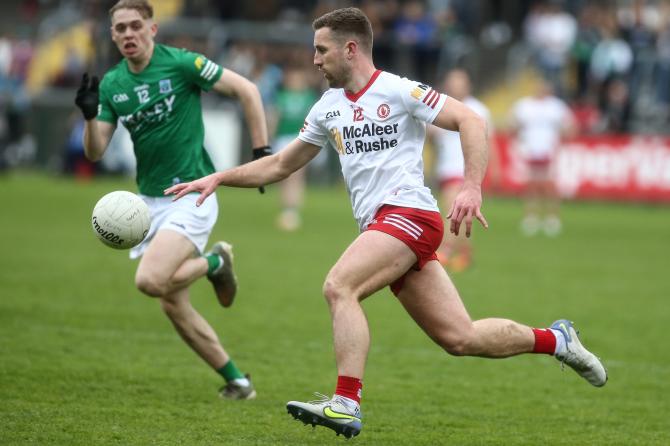 THERE are not really any soft draws in the Ulster championship but Derry always seem to get the harder ones.
Last year it was away to Donegal, the year before at home to a resurgent Armagh team when Derry were in Division Three. Before that if it wasn’t Tyrone it would be Donegal.
If you want to win Ulster you have to beat the best and Derry have a miserable record in the province despite having some great teams over the years.
They have just seven titles - the last being in 1998. Tyrone have 16 and half of those, plus four All Ireland titles, have come since Derry last won Ulster.
Derry will have no fears of Tyrone and Tyrone will not fear Derry but they are carrying the pressure of being Ulster and All Ireland champions.
The last time Derry visited Omagh when Tyrone were All Ireland champions was in 2006. Derry held Tyrone scoreless in the first half and ended up easy winners.
That has not been forgotten by joint Tyrone manager Brian Dooher who played in that game. In a recent interview he talked up Derry as a first division team in all but name. Clearly, he did not want his players to take the Oak Leaf side for granted.
Derry go into this game with the best defensive record of all 33 teams who played in the four divisions of the National Football Leagues, that, despite shipping 4-11 against Galway in what was their only defeat. Tyrone have conceded a lot more and scored just about the same as Derry
The Tyrone defence against Fermanagh in the preliminary round looked anything but rock solid conceding 2-10 against a third division team who also missed a further two open goals. In that game Tyrone had Conor McKenna red carded for ‘contributing to a melee’ but given the manner in which the Armagh trio got off in the Donegal affair it is likely that he will be free to play.
Tyrone came out of nowhere to win the All Ireland title past year after struggling through Ulster with a fair share of luck. They beat Kerry after extra time and a Mayo team who missed a penalty in the final.
There are times in sport when things fall into place for you. There are others when nothing goes right. Last year, everything fell into place for a Tyrone team playing attacking football under their new management of Brian Dooher and Fergal Logan.
The new pair let the handbrake off after years of defensive play under previous Mickey Harte.

Man Markers
Darren McCurry, the star Tyrone forward, is a player who when given space will tear any defensive to pieces. No doubt Rory Gallagher will have him closely marked with ether the young and fast Conor McCluskey or the vastly experienced Chrissy McKaigue.
Conor Meyler is another player with his sped and skill that can open up any defence and he is likely to pop up anywhere with the number seven on his back.

The Morgan Factor
Tyrone goalie Niall Morgan is not only a great shot but he is an outstanding goalkeeper. He has played soccer with Dungannon Swifts and represented Northern Ireland in under 18 football.
He plays midfield with his club Edendork and you will find him coming out of his position when Tyrone are on the attack to give an extra option. His kicking out is a big factor for his team and no doubt Derry will try and push up on these kickouts to put pressure on him.
Outfield, Tyrone have very athletic footballers who can manage their own game. They can get scores from any line including their full backs.
In their 2-17 total against Fermanagh ten different players registered scores. They will not get the same scoring freedom against Derry with players like Brendan Rogers, Chrissy McKaigue and Padraig McGrogan at the back.
Tyron have two very effective and tall midfielders in Conn Kilpatrick and Brian Kennedy, both are good under the high ball and can get forward quickly to join the attack. They will give the Derry pair of Conor Glass and Emmett Bradley a difficult seventy plus minutes.
The loss of Oisin McWilliams with injury and the withdrawal of Ciaran McFaul from the Derry panel has cut the Derry options. It will probably mean either Gareth McKinless or Ethan Doherty moving from half back to half forward.
The Derry attack relies heavily on full forward Shane McGuigan for scores but Niall Loughlin has been in good form this season and scored 3-16 during the league.
Seven players withdrew form the Tyrone panel since they won the All Ireland and many counties including Derry would be glad of them!
One of Tyrone’s key players, Peter Harte, missed the Fermanagh game having had an appendix operation but he is expected back for this intriguing affair
Derry have not used a lot of players in the league, manager Gallagher is noted for sticking to his starting fifteen all the way through.
A few of the Derry fringe players have drifted away but the still have a decent set of subs which includes sub keeper Conlann Bradley, All Ireland intermediate championship winner Ben McCarron from Steelstown, the lively Niall Toner always good for a score when he comes on, teenage sensation Lachlan Murray, the energetic Declan Cassidy and Paul McNeill.
The good news is that Slaughtneil’s Padraig Cassidy,who missed the league with a groin injury, is fit for this game.
The probable Derry lineout may look like this: Odhran Lynch, Chrissy McKaigue, Brendan Rogers, Conor McCluskey, Ethan Doherty, Padraig McGrogan, Conor Doherty, Conor Glass, Emmett Bradley, Paul Cassidy, Gareth McKinless, Padraig Cassidy, Benny Heron, Shane McGuigan, Niall Loughlin
It has all the ingredients of a top quality game and if the Derry defence can hold firm and Darren ‘Dazzler’ McCurry kept in check Derry are there with every chance!