Friday's game against Cavan on the station's YouTube channel 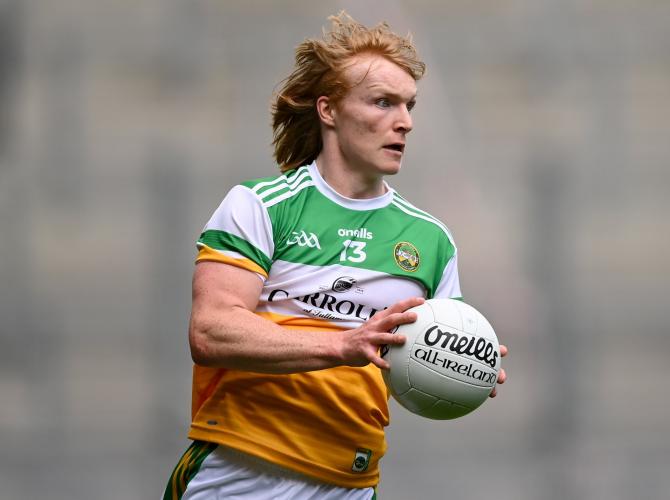 Offaly are the current All Ireland U-20 football champions.

DERRY Under-20 footballers' Ulster Championship clash against Cavan this Friday is one of over 30 games which TG4 will broadcast live on television and on the Spórt TG4’s YouTube channel from the EirGrid U20 Football Championship and oneills.com U20 Hurling championship in the coming months.

TG4’s 2022 U20 coverage began on Wednesday with three games on Spórt TG4’s YouTube Channel with coverage continuing later in the week with the EirGrid U20 Football Ulster Semi Finals.

The announcement comes hot on the heels of a hugely successful first quarter for TG4’s GAA coverage. TG4 broadcast 37 live GAA Games across its different viewing platforms (TG4, TG4 Player App and Spórt TG4 YouTube channel) during the Allianz Leagues. 768,000 people saw at least one full match of GAA Beo on TG4 television during this time and the series had a reach of 1.56 million.

GAA Beo broadcast five Allianz Leagues Finals on TG4 and the weekend’s action had a reach of 756,000 for the games. The Allianz Leagues Division 1 Football Final was the biggest hit with TG4 viewers with an average audience 228,000 watched Kerry v Mayo. TG4 was also widely applauded for their innovative ‘picture in picture’ coverage which showcased all the drama of the final rounds of the Allianz Leagues.

This was in addition to the triumphant return of the AIB Club Championships, the first ever GAA game to be televised from the GAA Connacht Dome with the FBD Connacht Final.

GAA Beo will continue to be the home of live and exclusive coverage of GAA on TG4. The series will be presented by Micheál Ó Domhnaill with commentary by Brian Tyers and many others. The series is produced by Waterford based production company Nemeton TV.

In addition to the live coverage of these games, GAA 2022, TG4’s weekly Gaelic Games TV highlights show, will continue Monday nights at 8pm. The series will broadcast all the best action from the previous weekend’s GAA games including highlights from the TG4 Ladies Football Championships.

Spórt TG4 will keep GAA fans up to date with best of the action across its social media channels at @SportTG4 across Twitter, Instagram, and Facebook and using the #GAABeo.

Rónán Ó Coisdealbha, TG4 Head of Sport, said: “Both the U20 Football and Hurling championships were so exciting last year; we’re looking forward to showcasing and championing even more young talent across TG4’s broadcast and streaming platforms. As a public service broadcaster, we pride ourselves on bringing all this action to Irish audiences on free to air platforms available to all.

"So far in 2022, TG4 has brought GAA Fans the best of the Allianz Leagues, the AIB Club Championship and the Masita Post Primary Schools championships and the Electric Ireland Higher Education Championships Finals.

"GAA Beo has ensured that fans of Gaelic Games have never been closer the action while watching the games at home.

"TG4 is very proud of the on-screen innovations that Nemeton TV have developed on GAA Beo including the overhead tactic cam and picture in picture ‘Red zone’ type coverage which they delivered alongside their already comprehensive production.”