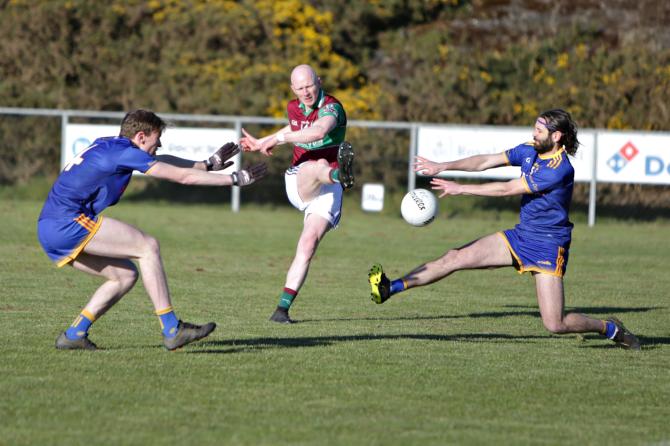 EOGHAN Rua welcomed the Derry, Ulster and All-Ireland Intermediate champions, Steelstown, to a sunny Pairc Eoghain Rua for the first Division One League game of the season on Saturday evening.

In near perfect conditions, the Coleraine side comfortably defeated a Steelstown team - short of their county players - by a handsome 4-15 to 0-6 margin.

After the sides traded points in the opening two minutes, Dara Mooney for the home side with Daniel Jackson replying for Steelstown from a free, Eoghan Rua went on to hit 1-10 unanswered before Jackson tapped over his side's second point, again from a free.

Colm McGodrick blazed a penalty wide in the 10th minute and moments later the bar came to Steelstown’s rescue as a close range shot cannoned down and then was scrambled to safety.

Just before the break Colm McGoldrick atoned for his earlier miss when he struck low to the corner of the Steelstown net sending Coleraine in 1-11 to 0-2 ahead at the break.

Three second half goals from Ciaran Lagan, firing to the roof of the net, Dara Mooney, a neat turn and shot to the corner, and Lorcan McMullen palming in the fourth goal late on gave the home side a winning start to the new league season.