Derry and Antrim Under-20 footballers meet at Owenbeg 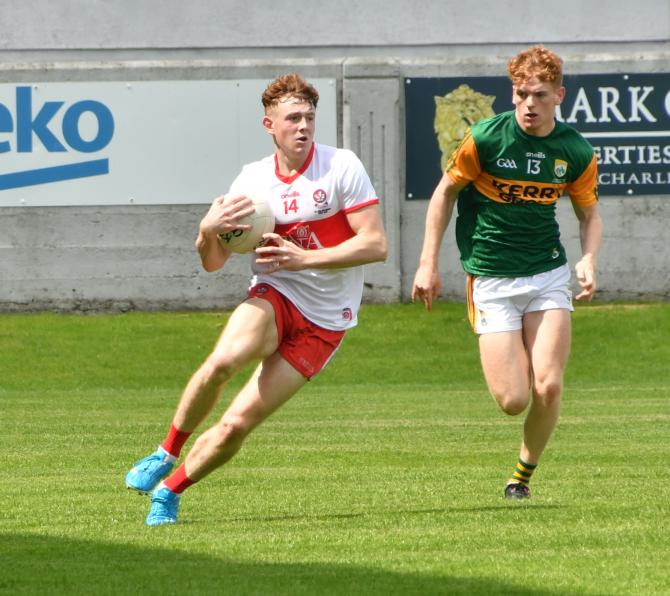 BACK boned by the All Ireland winning minor team of 2020, Paddy Bradley’s talented young Derry Under-20 team will be favourites to overcome Antrim when they meet at Owenbeg this evening (Friday) at 8pm.

With several of that minor squad currently playing with the county seniors it is unclear whether players like Lachlan Murray or Matthew Downey will be available.

Last year, Derry fell to Monaghan in the opening round at Celtic Park but for a number of reasons they were not at full strength.

Derry have had three competitive games to date, winning the last two. With little preparation behind them they lost heavily to eventual Leo Murphy Cup winners Donegal.

They had notable victories in the last two, beating a fancied Mayo team at Loup by a point and winning comfortably away against Roscommon.

With St. Mary’s Magherafelt players now available the addition of Eoin McEvoy, Niall O’Donnell and Conor Shiels from the minor winning squad will give Derry more options both in defence and attack.

Antrim never really can get off the ground at under age level but in a local derby they will not be a pushover.

With the powerful Dan Higgins to anchor the team from midfield and a tight defence around excellent centre half Eoin McEvoy, Derry should go through to the semi final with forwards like Matthew Downey, Niall O’Donnell, Mark Doherty and Charlie Diamond.

Report in next week's Chronicle.