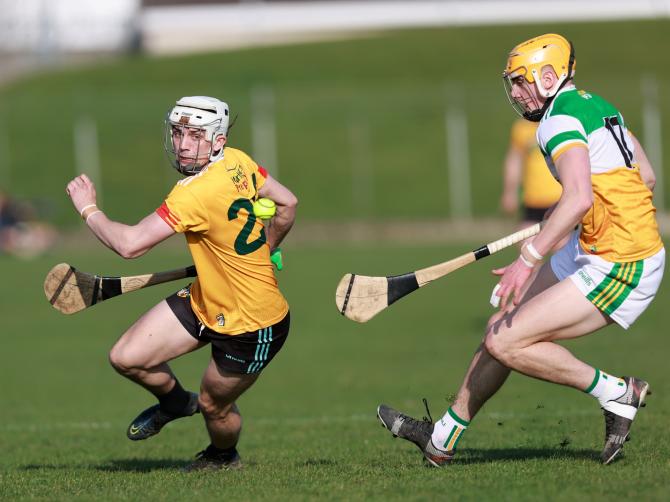 Antrim substitute Seaan Ellioot gets past his marker during Saturday Division 1 Relegation Play-Off against Offialy in Navan. Pic by John McIlwaine

THE SAFFRONS got there in the end with this seven point victory against Offaly at Navan.
When the chips were down Darren Gleeson’s side came good, retaining their Division One National Hurling League status - but, boy, they made life very difficult for themselves.
A season which promised so much saw them in this life or death shoot-out, after they had tested some of the best teams in the land.
Unable to get results in any of their five league games, that one point defeat at the hands of Laois certainly proved the tipping point and when they were blown to smithereens by Tipperary in their final game, the Saffrons' camp was not the happiest place to be in.
Disappointment, regret and guilt were very much to the fore, not the ingredients required for success, but Gleeson and his management team somehow raised their spirits, they played like demons and they are, where they should be, at the top table for another year.
Seven points separated the sides at the end of this fantastic battle but, in truth, it could and should have been double that amount as the Saffrons dominated from start to finish.
Leading by five at half-time, Offaly fought back to level early in the second half and when second half substitute Niall O’Connor was black carded there were a few worried looking faces among the Antrim fans.
They came back brilliantly, however, and were ten to the good deep into injury time when Offaly grabbed a very late consolation goal.
Dunloy’s Conal Cunning top scored, with nine of his ten points coming from frees, having taken over that responsibility from the injured Neil McManus, while Ciaran Clarke looked back to his best with four points to his name.
Loughgiel’s James McNaughton and Dunloy’s Keelan Molloy got the other goals for the Saffrons as they reaped the rewards of their fast attacking play and never say die attitude.
The Saffrons began at a frantic pace with McNaughton crashing home a fourth minute minute goal to settle any nerves but Offaly led thanks to some wonderful long distance points from Eoghan Cahill and Jason Sampson. Going into the final couple of minutes of the first half, the sides were tied on 1-9 to 0-12.
Antrim, however, finished the half in style with Clarke and Molloy firing over points before Domhnall Nugent and Conal Cunning combined to release Molloy for their second goal and they changed ends with a five point advantage.
Offaly rallied at the start of the second half with a goal and two points in the opening seven minutes while the Saffrons were reduced to 14 players when Niall O’Connor was black carded in an incident that saw Cahill score from a penalty but Antrim regrouped to control the remainder of the game.
They outscored their opposition five points to one in a ten minute period that effectively saw them build an unassailable lead.
Huge frees from McNaughton and Cunning, while Joe Maskey could have easily found the back of the net with his drive in that same period and Conor McCann’s 18th minute point proved decisive.
Cahill’s accuracy from placed balls kept the Faithful County’s hopes alive but another four unanswered points and a brilliant save from Corcoran to deny Cunning put Antrim eight ahead with eight minutes remaining.
Offaly were then reduced to 14 for the last five minutes when Joey Keenaghan received a second yellow card with the Saffrons taking full advantage by extending their lead to 11 thanks to three points that were shared by Eoin O’Neill and Cunning.
However, there was still fight left in this Offaly side, like Antrim trying to prevent relegation, and Cahill kept the pressure on them on when firing to the back of the net from a free.
Antrim responded with Seaan Elliott winning a penalty, Eimhin Kelly black carded for his challenge, and while Clarke found the back of the net from the spot the score was disallowed.
It mattered little, however, in what was the last action of the game.
A third year at the top table of hurling beckons for the Saffrons while Darren Gleeson and his backroom team will now turn their attention to another assault on the Joe McDonagh Cup.


* Keep up to speed with all the latest GAA stories each Tuesday in The Chronicle.